Not If I Save You First by Ally Carter 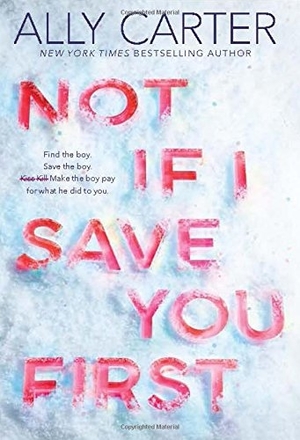 Ally Carter’s suspenseful thriller, Not If I Save You First, is a young adult novel that combines action, adventure, and survival as well as the elements of friendship and hope. Madeleine (Maddie) Rose Manchester is the daughter of a Secret Service agent who protects the president. After an incident at the White House where there was an attempted abduction of the First Lady and Maddie’s father was shot protecting the presidential family, Maddie must move to Alaska to start her new life with her father where it is cold, dangerous and they are all alone. With this new change Maddie also loses her best friend, the president’s son, Logan, who never responds to any of her letters. However, six years later, the president sends Logan to live with Maddie and her father in order to keep Logan out of trouble after he escaped from his security unit and was unaccounted for. Although, Maddie knows that the Alaskan wilderness is dangerous, after she is attacked and Logan is abducted, she must fight her way through a storm that is brewing to save her childhood best friend.

This story is told through third person point of view, focusing on alternating between Maddie and Logan’s perspectives. The novel is character driven with each chapter not only focusing on the story’s plot, but on the motivations, emotions, and thoughts of Maddie and Logan. This allows for great character development and complexity in a fast-paced survival story. Chapters that start with Maddie’s letters to Logan give a flashback to the past. The reader gets insight into Maddie’s past emotions, loneliness, her humor, her ability to adapt to Alaska with each new survival trick she learns, and how important it was for her to try to maintain her friendship with Logan.

The setting is greatly developed in this story and the environment impacts the characters as they have to survive in the Alaskan wilderness. In the beginning of the novel, readers are immersed in the White House setting with ten-year-old versions of Maddie and Logan, which is used to contrast the opening scenes of Maddie in Alaska as a teenager and skilled survivalist. Maddie armed with her bedazzled hatchet, gathers wood, works with chain saws, and when she is not studying or reading library books, she helps replace the roof’s shingles. The environment is not only developed through description, but through the character’s decisions and perception, action, and the lengths they must endure in hope of survival.

Friendship is an important theme in this story and Logan and Maddie’s first interactions after not speaking to each other for six years add humor and strong dialogue to the suspenseful, action packed tale. Their friendship is complex and displays character growth through the story as they must support, trust and forgive each other.

Not If I Save You First is full of action and tales of survival as well suspenseful twists that create a thrilling read. People who enjoy tales of friendship, forgiveness, survival, and suspense will appreciate this thrilling and well-written story.