Our Year of War: Two Brothers, Vietnam, and a Nation Divided by Daniel P. Bolger 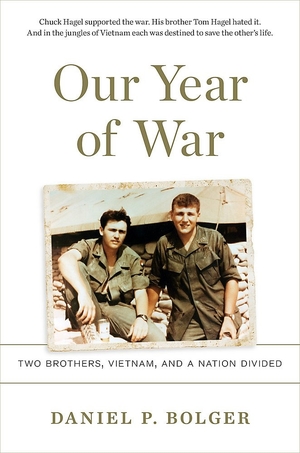 The author of this book is a retired Lt. General of the U.S. Army with a special faculty appointment to the North Carolina State University where he teaches military history. He has written a number of books on military history.

In 1968 Chuck and Tom Hagel, brothers two years apart in age, served together in the same infantry squad in the Vietnam War. They are believed to be the only siblings to so serve. While this book title strongly suggests a biography of the year they shared, it is unfortunately both much more as well as much less. The much more includes the history of the Hagel family, Nebraska, the Strategic Air Command in Nebraska, General Curtis LeMay, the Vietnam War before and after the Hagel’s involvement in the war, details of American citizen’s responses to the war, American politics of the time, details of Army training, and details of military units movements and actions in Vietnam. Without question individuals interested in understanding where various military (United States, AVRN, Viet Cong, and North Vietnamese Army) units were located and their associated actions will appreciate the provided information. The extensive details described above provide more a story of the Vietnam era as viewed from the United States than a story of two young men living, fighting, being wounded and surviving the unique ravages of this war, each in their own way. Although there is discussion and description of their actions during that year, it is somewhat stilted and clinical. The book We Were Soldiers Once… and Young by Lt. Gen. Harold G. Moore and Joseph L. Galloway presents a much more gripping, frightening and emotional experience of what the Hagel’s probably experienced.

Unfortunately, Mr. Bolger does a disservice to the Hagel brothers by being superficial in the details of their experience in Vietnam. Part of this may be secondary to this not being “an authorized” biography and not being able to deeply explore the specifics of their experiences, emotions, and feelings. The author throughout the book uses language and quotes of soldiers in the war that at times feels gratuitous and unnecessary. Examples include “…the Tet Offensive cooked off” and “…some stubborn VC shooters…”, “After taking the full impact of hundreds of red hot ball bearings…. It didn’t look like there’d be an open casket back in Baltimore, Maryland.” There is little doubt that in the throes of war soldiers use such blunt language, unfortunately, this choice of words detracts from the presentation of the story. Overall this book appears an accurate presentation of facts, offering personal opinions of the author, but poorly generates true empathy for the experiences and emotions the Hagel brothers had during their year in Vietnam.