See What Can Be Done: Essays, Criticism, and Commentary by Lorrie Moore 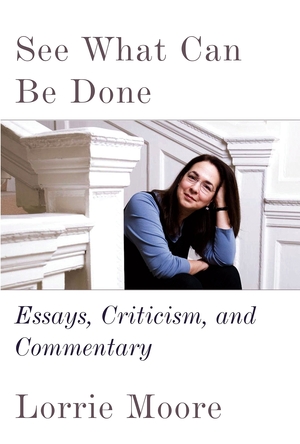 Within the opening sentence, Lorrie Moore explains that the title of this book – See What Can Be Done – is not a boast but an instruction she received with almost every note from the editor of The New York Review of Books.

Nonetheless, Moore is so adept at concise analysis and so skilled at writing that it’s hard for the reader to think, “Aha, so this is what can be done.”

The subtitle Essays, Criticism, and Commentary is a misnomer. While there are a few cultural commentaries and criticisms, the 66 pieces that comprise this collection are primarily book reviews written for The New York Review of Books since 1983 with a few responses about politics, movies, and TV shows.

While sometimes critical, she’s never acerbic to the point that she seems to be holding back when she writes about Lena Dunham or her 2011 commentary on the GOP Debate. She captures the Tea Party’s clown-car absurdity (few of these self-avowed patriots knew the words to the US national anthem) and, with a clarity that seems ominously clairvoyant in the current political climate, points to growing division between Americans and its consequences.

Overall, See What Can Be Done is like hanging out with your best friend. Be prepared to add books to your Goodreads’ to-read shelf and consider some of your old favorites from a different perspective. You may not agree with her 100% of the time, but you’ll be more well-rounded and interesting to have had this “conversation” with her.