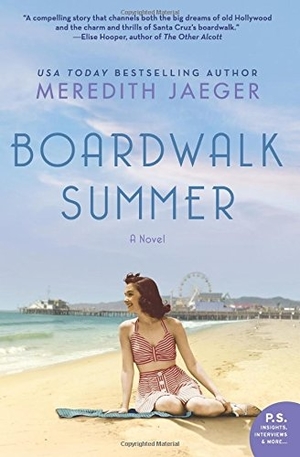 In Santa Cruz in 1940, Violet Harcourt dreams of moving to Hollywood to become an actress. The only thing standing in her way – her husband, Charles. To outsiders, Violet seemingly has the perfect marriage and lifestyle. However, Hollywood doesn’t only represent fulfilling her dreams, but also an escape for her and her unborn child from her abusive husband. Sixty seven years later, single mother Marisol Cruz discovers Violet’s obituary outlining Violet’s suicide. With the help of a new friend, Marisol investigates Violet’s death and how it relates to her her late abuelo.

The story thrives under Violet’s point of view. Violet’s foray into the Golden Age of Hollywood is simultaneously nostalgic and realistic. Jaeger looks past the perceived glamour of Hollywood and presents a grittier version. Marisol’s story on the other hand suffers from repetitive mentions of her being a single mother. While this is an important part of her identity, it’s initially over emphasized and attributed as the cause of everything awry in Marisol’s life. She becomes more three-dimensional through the exploration of her new job and relationship.

Both women have interesting and satisfying character arcs that ultimately connect to the central mystery surrounding Violet’s death. The mystery is resolved somewhat too conveniently, creating superfluous connections that detract from the story. Once readers overlook its predictability and occasionally awkward dialogue, this makes more a delightful summer read.