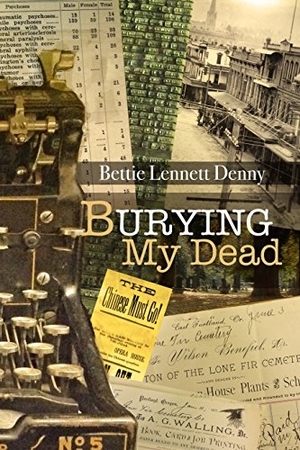 A chance encounter in the Lone Fir Cemetery between reporter Murphy Gardiner and Anji Lee sparks a deep friendship and launches an investigation into the history of Portland. Anji has been tasked with a long-standing family tradition: placing three white roses on the gravestone of Simeon Small twice a year. The request has been passed down from mother to daughter for generations, but what exactly the connection between Anji’s ancestor Zhou Zhen and Simeon Small was, has been lost to time. This mystery piques Murphy’s reporter instincts and she is determined to see if she can find enough clues to uncover this long-lost connection for her new friend.

Bettie Lennett Denny’s Burying My Dead is a Portland centric historical fiction that will draw readers along like the waters of the Willamette. The narrative drifts between Murphy’s current era discoveries and the stories of Simeon, Zhou Zhen, and Emerson Asher. It takes a little bit of time before Emerson and Zhou’s connection to Simeon unfolds, and Simeon’s story takes some time to unfold before he arrives in Portland, focusing on aspects of his childhood, his fascination with the art of photography, his experiences during the Civil War, the creation of his family, and his travels to Portland over the Oregon Trail. However, despite the slow-paced start, the narrative is never boring, and the connections between the characters are revealed soon enough.

This is a very heavily researched historical novel with numerous locations that readers are likely to recognize, particularly those who live or have lived in Portland. It’s not just the locations that come alive, but also the various historical events. Some of the details included are very small but all of them weave together a fictional novel that is grounded in real history, lending a rich and solid framework to weave the stories of Bettie’s characters. Many of these events are unpleasant, touching on the mistreatment of Asians and African Americans, the abuse and treatment of women during a time when they were not allowed to open their own bank accounts or have any property, and the stark reality of rampant disease and tragic deaths that are now avoidable due to advances in modern medicine. However, despite the harsh realities the characters face, the book’s message is largely positive and the narrative is truly engrossing despite this not being a quick read. Burying My Dead is a compelling work of fiction and is well worth the time investment to see the story through to its end.