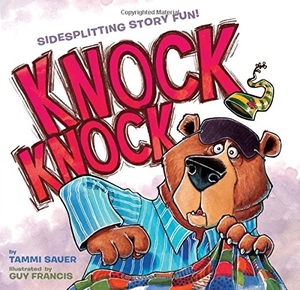 Tammi Sauer and Guy Francis have created a story out of knock knock jokes. This feat was unexpected. I anticipated a book with a few jokes or the same joke, or jokes and a really annoying main character but instead the jokes create the whole story about a bear preparing for hibernation (hibernation party anyone?) and then awakening in spring. The illustrations by Guy Francis are quite detailed giving the reader plenty of clues for ad libbing in this story. We spent a lot of time describing what we saw occurring on the pages, how it fits with the general story and also a few rounds of I Spy.

Similar to another book by this author, the dust jacket/inside cover starts the book out on the right foot. This time featuring the first of seven knock knock jokes: “Knock Knock / Who’s there? / Bea! / Bea who? / Bea-ware! this book is really funny! ” This opening joke, really got my little’s attention because his nickname is Bee. There are several pages of story sans knock-knock, which make this a great bedtime read, as it is all about getting ready to sleep/slumber and saying goodnight. I recommend this book, another delightful ready by Tammi Sauer. I do, however, feel that I will likely regret introducing my child to knock knock jokes so young…… Knock Knock /  Who’s there? / Ida / Ida who? / Ida recommend this book for everyone! [bonus joke by moi]