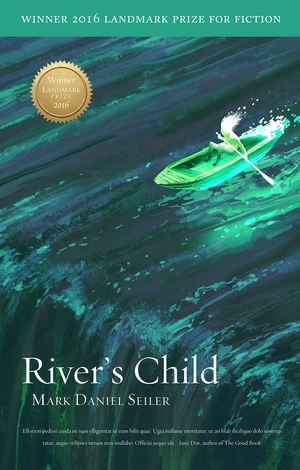 Mavin Cedarstom heads in to work one morning at the Svalbard Seed Vault. He’s early and is the first one there. After checking his mail, Kep, the AI that runs the facility, initiates an emergency lockdown that traps Mavin inside. Time passes, and eventually a group of desperate explorers find their way to the vault. Blight rules the land and Leto, their psychic priestess has had a vision of seeds that may save their people. Awoken by Kep at the intrusion of the strangers in the facility, Mavin finds a world completely foreign to his own. Thrust into the care of Simone, Mavin and the few survivors struggle to make it back to civilization with their precious cargo. Will Mavin’s knowledge of the past be a burden, or a force to change the world for the better?

Mark Daniel Seiler’s River’s Child is a fish out of water tale, with Mavin being an educated man in a woman’s world, in a time where his knowledge of even basic chemistry has the potential to build or topple nations. While it is never a hundred percent clear as to what exactly caused the fall of our civilization, the fall and other events have been passed down in lore and mythology, which is a running theme in the book. The book is a mix of science fiction and fantasy and manages to blend the two quite well. Characters are well-defined by their motives and mannerisms if not physical traits, even the ones that only last for a few pages. This is a plot driven book, and is more focused on the overarching story and the larger themes than the characters, so while characters are memorable, it’s easy to read the book without becoming emotionally attached to their individual plights.

The book’s writing is solid, but is stylized in a way that utilizes short sentences and the staccato repetition makes it feel overly simplified. While this fits the post-apocalyptic civilization that Mavin finds himself in, it doesn’t really work for the first few chapters. This isn’t necessarily a negative, as the style fits the world setting for the most part, and will instead come down more to reader preference. The actual negative in the writing is how abruptly the book will swap between current times and Mavin’s and other character’s various flashbacks with no visual cue. Typically, a significant flashback or time jump that is more than a character’s sentence or two brief musing is signified by a chapter break, or a blank line between the paragraphs; here it just flows into the current story with sometimes not even a paragraph break to signify the change.

All said, this is a story that covers quite a lot of topics and ends up being a much more in-depth novel than readers may at first suspect. Mavin spends much of the book wrestling with his new reality and trying to come to terms with how much time has passed, not to mention trying to discover where he fits among the new world. The folklore and mythology that constantly threads its way through the book is wonderfully charming and ends up adding to the story rather than being a distraction. River’s Child is an enjoyable novel that is likely to satisfy fans of the post-apocalyptic genre.