The Favourite by S.V. Berlin 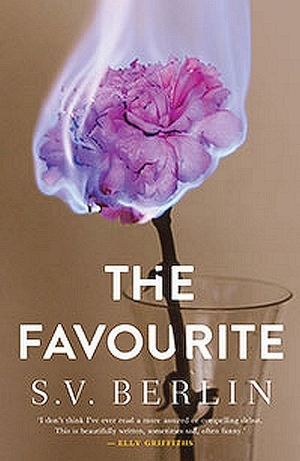 Siblings Isobel and Edward live an ocean apart and haven’t spoken in many years. He resides in the London area, while Isobel moved away to find herself in New York City. They have to reconnect in London after the unexpected death of their Mum, Mary. Not being close has both of them acting strangely towards each other. Edward barely says two words to her although he did pick her up at the airport with his girlfriend Julie, who seemed eager to learn about this long-lost sister of his. Isobel feels like she has to tread lightly around him. Needing to close up the house in one week for new renters leaves them barely communicating, other than to say to say “you take the kitchen and dining room and Jules and I will take the living room.” Edward decides to divide and conquer, putting items in three different boxes while Isobel can’t seem to box anything the first day as she carefully cradles each item and then sets it right back down. Isobel finds a box of letters from her that were never opened by Edward and shelves them in one of the boxes. Spending time with each other and trying to share feelings opens some treasured memories of their past and good times. Edward blames himself for the way things went wrong and they realize Mum kept secrets too. Thrown together by death has them both trying to understand their past mistakes and to find a way to move forward.

This is a smart, sad, and funny debut novel for author S.V.Berlin. The story is told by all three of these characters in their own distinctive voice. Each tells their point of view as how the day went and the feelings they felt or expressed. Each of the characters do a bit of soul-searching throughout the story, which was a smart way to showcase each character. The reader can also see how each character grows through the following weeks. This is quite a long story to read, clocking in at over 500 pages, although the journey definitely becomes more enjoyable as the days pass. The story dealt with the nature of grief and the surreal situation about the death. The Favourite turned out to be far greater than anticipated and an truly enjoyable read!