This is Portland: The City You’ve Heard You Should Like by Alexander Barrett and Andrew Dickson 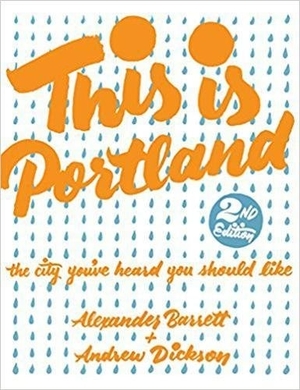 Books, bridges, beards, and beer are a sampling of the cultural aspects Alexander Barrett and Andrew Dickson touch on in This is Portland: The City You’ve Heard You Should Like.

Before Alexander Barrett moved to Portland, everyone told him it was the best city ever but couldn’t – or wouldn’t – say why, so in 2011, after a year and a half of living in Portland, he wrote the first edition of This is Portland to encapsulate in his opinion what makes Portland great. Since then, he moved to Shanghai, so he conscripted co-author Andrew Dickson, who’s lived in Portland since 1995, for this second edition.

Although Portland’s still Portland, much has changed since 2011: a revolving door of restaurants and boutiques, new buildings soaring toward the sky, and a new bridge built across the Willamette. People moved here in droves in search for the dream of the 90s that Portlandia promised and forever altered the culture.

“A lot of Portland’s weirdness has aged up or sadly been priced out and moved on.”

Like many Microcosm Publishing books, This is Portland is a small, concise book with great artwork. It’s an easy read and great souvenir for a tourist or introductory guide for newcomers. Even a longtime Portlander might learn one or two tidbits, such as how many Benson Bubblers (water fountains) can be found downtown.