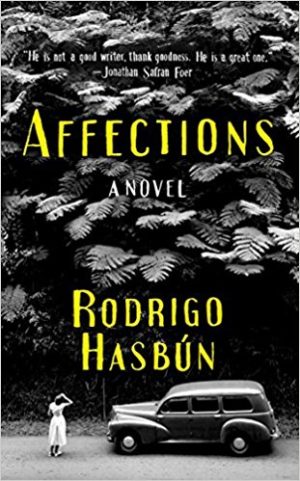 Shortly after WWII, a cameraman for the Nazis, one who worked directly with the famed Leni Riefenstahl, moves his family to Bolivia. Hans Ertl, the patriarch, has not put his camera away, and instead is filming a documentary about a lost city in the Bolivian forest called Paitití. But the documentary can’t make up for the fact that the family is falling apart following the war, and their lives are slowly coming undone. In this gripping and moving English-language debut from Bolivian novelist Rodrigo Hasbún, we are given the story of a postwar German family in exile as they try to unsuccessfully piece themselves together.

Hasbún’s novel has been translated into twelve languages before being wonderfully brought to English-speaking audiences by one of the current Latin American translation superstars, Sophie Hughes. His work is not completely new to American audiences. In 2007 he was selected by the Hay Festival as one of the best Latin American writers of his age, as well as being named one of Granta’s Best Young Spanish-Language Novelists.

The novel is a collection of voices, written from the perspective of each member of the Ertl clan, each relaying a part of the family’s story spanning three decades following the war. Hasbún does a terrific job of telling the whole story in parts. The narrative feels akin to Faulkner’s As I Lay Dying or Roberto Bolano’s The Savage Detectives, both of which employ a collective voice to tell a single tale. Hasbún succeeds in this form. The novel is most interesting when we a get a view of one family member from the other’s perspective, and the book is rife with dramatic irony and tension in this regard.

The first two-thirds of Affections is spectacular. But as the novel progresses, Hasbún throws in a narrative thread that connects one of Hans Ertl’s daughters to Che Guevara and the Bolivian Marxist. This subplot is not as compelling as the early novel because Hasbún deals rather obscurely with the history. Nothing is made too obvious, and because of this, the novel can be at times hard to pin down. But with that aside, the emotional lives of the characters are still highly compelling to the end.