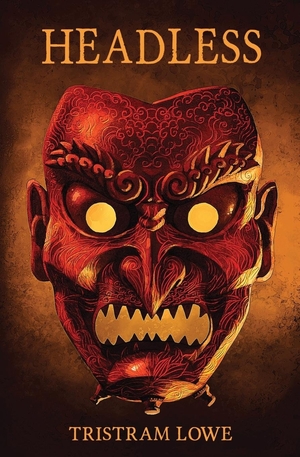 Akio Tsukino just wanted a chance to be the lead photographer on a front-page article, or really, the excuse to spend some time with the cool and aloof Masami Sato. The two of them head off to Kofu, one hundred and twenty miles west of Tokyo, to investigate a string of stylized killings. People are being beheaded and the heads themselves are missing. The police haven’t had much luck with the investigation, but Masami isn’t dissuaded – she’s helped to break cases in the past and is determined that this one will be no different. However, something does seem different this time. Why are the witnesses reporting sightings of their loved ones wearing a suit of ancient samurai armor? Is it mass hysteria or is there something supernatural going on?

Headless is set in Japan, and while it isn’t difficult to follow it also doesn’t hold readers’ hands with regards to terminology and would be best suited to people who have some familiarity with Japanese culture and history. That said, the mystery is still likely to be highly enjoyable even for those unfamiliar with the location and culture. The supernatural elements of the novel are slowly woven into the book, making the climactic confrontation and final reveal to be greatly rewarding and getting to experience the killer’s narrative at the end was an added bonus. The story is decently fast paced and never really drags, making this a mystery to be quickly devoured.

Our protagonists are an interesting bunch, neither terribly likeable, but both are relatable. Masami is an observer, knowing how to read people and how to act in order to get them to give her information and work with her so she can acquire her stories. Akio is outgoing, brash, and seems to derive great pleasure out of annoying Masami to crack her normally stoic outward appearance. Masami is the consummate professional who is often forced to deal with the inevitable misogyny of men who don’t believe a woman can be an investigative journalist and as such hides her insecurities with a mask of cool aloofness. Akio wants his shot at proving himself, and hides his insecurities behind a wall of constant chatter. Headless gives readers the chance to see from both of their perspectives, and while our protagonists may not fully come to understand each other over the course of their investigation, we come to understand what drives both of them.

Tristram Lowe’s novel, Headless, is a captivating mystery with just the right touch of paranormal and is a great read for those who enjoy a bit of gore, historical fiction, and mythology in their mysteries.