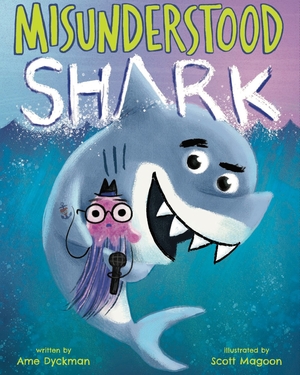 The best line in the book is “the ocean gets its saltiness from the tears of misunderstood sharks!” How is that for a teaser for Ame Dyckman and Scott Magoon’s book, Misunderstood Shark? When I first read the book, a certain Kelly Clarkson song kept popping in my head, almost to the point I might try to sing a shark version of that song at some point, or maybe another kiddie rock band could cover it. Regardless, this is catchy story about a shark that is stereotyped as a shark. Mixing in shark facts with a funny story and a shark with a visible arm tattoo, Dyckman and Magoon, will keep you guessing to the very end if Shark is true to his animal nature. No spoiler alert in this review though. You will need to go read the story for yourself!

I love the television live show platform and the guest hosts, camera, and mic squids are comical. This book was perfectly timed both for a focused school theme (ask me about my son’s shark hat sometime) as well as everyone’s favorite aquatic animal themed television time – Shark Week!!!! Best and certainly not last, nowhere in this book are the words doo doo doo (think baby shark earworm). I love this book and absolutely recommend. I would also suggest finding and following the author on Twitter @amedyckman – enjoyable feed and glimpses at her other books and inspirations.