The Sacrifice of Sunshine Girl by Paige McKenzie with Nancy Ohlin 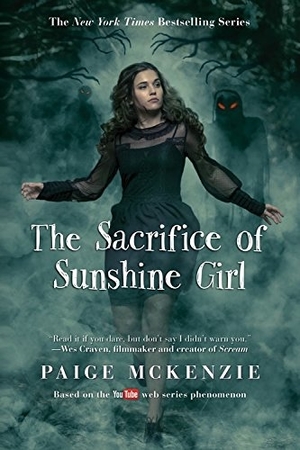 Paige McKenzie’s third installment, The Sacrifice of Sunshine Girl, is just as riveting and satisfying as its predecessors, with a unique and quirky main character, great character development, as well as an expansion on the history and powers of the supernatural. The YA series follows Sunshine Griffith, a sixteen-year-old that had her life uprooted from Texas to eerie Ridgemont, Washington, where Sunshine finds out that she is a luiseach, which is a supernatural guardian who can help spirits move on and has to assist in maintaining the balance between good and evil. Dark spirits and demons are becoming more powerful, organizing events to trigger a spell that will leave humans and light spirits vulnerable to the darkness, enabling them to rule the world. Sunshine must perfect her skills and figure out a way to stop the spell and save the world.

The novel is told through the first-person point of view, which allows the compassion Sunshine feels and her dedication to helping spirits to be showcased as a major part of the story. Her character develops from being hesitant about her powers and abilities to wanting to be an active force in stopping the demons in order to save the world. Her determination and the varying group dynamics she has with her friends and family adds to the story’s complexity. Sunshine’s relationship with her birth parents, Aidan and Helena, is well-developed, with multiple twists and great backstory pertaining to the history of luiseach and her parents’ motivations.

As an added bonus, there are chapters told from the villain’s perspective that further showcase the history of the luiseach and the demons, including the numerous conflicts between good and evil. The first page of the book starts with the villain’s perspective, allowing the reader to learn about the severity of the events taking place, while continuing to question who the villain is and learning more about the demon’s motivations. This along with Sunshine and her friends’ research, helps to uncover more of the luiseach’s past and the part that Sunshine will play in saving the world.

The Sacrifice of Sunshine Girl combines supernatural elements, mystery, adventure, horror and quirky humor for a well-written and suspenseful read. Its fast pacing, adventure, and complex characters will captivate readers of the YA, mystery, supernatural, horror, and adventure genres.