China Rx: Exposing the Risks of America’s Dependence on China for Medicine by Rosemary Gibson and Janardan Prasad Singh 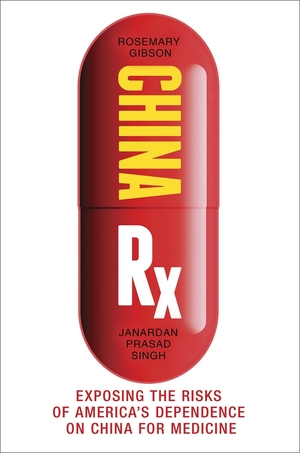 Being of ‘quite an age’ this reviewer remembers when “Made in Japan” promised a shoddy, poor quality product. Then, in the eighties and nineties, it seemed like Japan was aggressively buying us up bit by bit. Now, however, things seem to have settled down and we have quality goods and reasonable international relations.

China Rx leads me to believe that we are in the middle of the progression of China; from developing nation to emerging nation to advanced nation and the progress is not always smooth and, in China’s case, is downright risky for the unwary.

China Rx starts with the story of contaminated Heparin, a ubiquitous blood thinner that claimed the lives of at least four people and put three hundred and fifty at risk according to the CDC. This is just the tip of the iceberg. There are thousands of other drugs and drug contents that could be problematic as well.

Eighty-nine percent of prescriptions in the US are generic versions of proprietary drugs and it is here that China is bulling ahead, capturing about forty percent of the market in the active ingredients, precursors, and building blocks for drugs that YOU are relying on for safety and effectiveness.

How is this possible? Money. The US mania for lowest price and investor return has put our companies in the position of needing to offshore production with China aggressively cooperating in our slow progression to reliance on their good will and cooperative attitude. A prescription for trouble if there ever was one.

How do I know all this, I read China Rx. It is a strong book that pulls no punches, but is somewhat reluctant to totally condemn the participants in this financial dance. They seem to realize that China is a work in progress, but one that needs close oversight that is not present at this time.

China, while copying many capitalist methods, is still a Communist, totalitarian regime which, with the added complications of distance and culture, presents a huge challenge to attempts to assure quality and even availability of thousands of medicines that the United States relies on for the safety of our citizens and even the functioning of our nation in times of an epidemic or other disaster. As an aside, China also is the sole producer of an ingredient for Hellfire missile fuel. It seems unwise to put all our eggs in China’s basket.

China Rx meticulously covers the problems we are encountering and the reasons why they are as they are. Alarmist? Yes, but the authors also offer a ten step plan to regain control and stave off disaster in the case of disagreement with the supplier of much of our medical security. It is well written, interesting and readable. I heartily recommend reading it and then writing your representatives in government.