Digging In by Loretta Nyhan 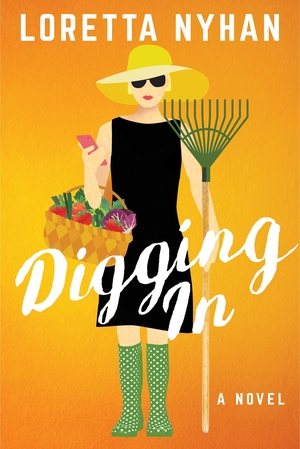 Paige’s life was perfect until her husband died. She instantly became a single mother to her teenage son, Trey. Two years later, Paige finds her life slowly spiraling out of control as she tries to deal with daily issues. The water heater is broken and Trey threatens to leave to live with his friend, Colin. Her job at the advertising agency is now in peril to younger personnel. Her grumpy next door neighbor complains to her about the weeds in her backyard. Near the breaking point one night after work, she drinks some wine and starts digging out the weeds. She finds the digging therapeutic and digs more and deeper each evening. Not clear about why she is doing this makes Trey and a few coworkers concerned. But for Paige, she is finding herself opening up with complete strangers and realizes that others have grief issues to deal with also and that she isn’t alone. With her digging, she begins to garden and her whole new world begins to bloom as she heals herself and maybe a few others.

Written with warmth and emotion and yet still managing to be funny, readers will be rooting for Paige’s garden. The story deals with grief and changes with a light touch. Paige is in her 40s and many 40 something readers will be able to relate to the stress she is feeling with her son and her job. The characters were quirky and real. The author adds her own story that tragically coincides with the novel she wrote. Digging In will be an emotional read for some, but is a good story for all. This is a quick read and an unexpected gem!