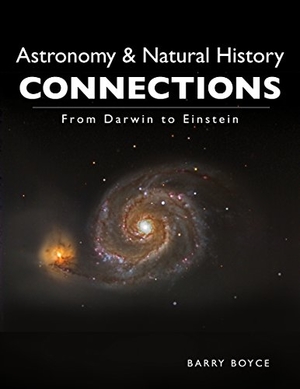 The Baryon Press recently announced the release of a new science title that is a combined, in-depth astronomy/ natural history course. Astronomy & Natural History Connections: From Darwin to Einstein, written by Barry Boyce, is essential reading for the ever-curious in both sciences; the information ranges from entertaining yet thorough discussions on relativity and quantum mechanics as well as dynamic presentations of natural selection and speciation.

The book is unique in that it is based on an outreach-based teaching approach that comfortably, yet thoroughly connects the reader to the Universe, and thereby to both sciences. In the author’s words, “this is not “astronomy for the dummy or the idiot or those in a hurry; it’s for the vast majority of the general public that call themselves interested as well as curious to learn much more about the world around and above us.” Those are strong words, and when questioned as to what is backing them up, Boyce had this to say:

“My method was not developed in a university lecture hall; it is a skill acquired from over 30 years of natural history lectures at sea, from the Galápagos Islands to Antarctica. I had the honor and good fortune to do that for thirty years before I retired. Now, I teach astronomy on an outreach basis for the University of Arizona, which has one of the best astronomy departments in the nation. And natural history is included in my presentations. My goal for this book was to use my background and years of teaching to a lay audience to make the learning for the reader a bit easier and more than a bit of fun. Essentially, it is to connect the reader to the Cosmos, which I consider to be essential.

It’s quite a challenge. It’s much easier to get people to fall in love with the Galápagos with all the little sea lion pups bleating on the beach than it is to begin a love relationship with the Cosmos, which is a bit intimidating with all the terminology – Black Holes, Quasars, Neutron Stars, Nebulae, Pulsars, Red Giants, Dark Matter, and all the rest. Those are formidable, and a lot to take in. Astronomy is a physical science, and calculus is part of the curriculum and communication. Many pictures show Einstein and other notables at the blackboard, writing equations; it looks impressive but can appear distant and somewhat intimidating.

Let’s take this one step further. People are taken by the world of nature; more and more of them watch Discovery Channel and take off on major excursions to see wildlife. They love certain aspects of Astronomy as well – Solar Eclipses, Meteor Showers, Missions to Mars, searching for Life elsewhere, etc. But, as stated above, we can easily be intimidated by astronomy; we’re not entirely comfortable with it. Why? Aside from the calculus and chalk boards, there’s not a solid connection to it as there is to whales, penguins, polar bears, etc. The lack of connection is largely a spatial one; we don’t know how and where we fit in. It’s really difficult to get connected to something if you don’t know where that something is. For the most part, it’s a problem that has come with the territory of life in an automated society; compared to life say 50-100 years ago and certainly further back, there is less of a necessity for us to know our latitude and longitude or what time the Moon is going to rise and what phase the Moon is in. This lack of spatial orientation and awareness is not often discussed, although it should be, if for no other reason as to improve science education. So, how exactly do you connect someone (whether a student, tour client, or reader) to what’s up there.

First off , when you have a guest, you make them feel comfortable. The reader is very much a guest, and as an author, I am providing a tour. You make introductions to the night sky, and begin with a few easy questions. For example, what time does the full Moon rise? We’ve all seen it occur many times, and the answer should be obvious, yet it isn’t. If I asked why the Moon is full, some would answer because the Sun is directly opposite, lighting it. Right, so where is the Sun? It’s setting, isn’t it? So a Full Moon rises at sunset. That’s the correct answer. Kind of opens your mind just a little bit, and it’s intended to. It goes on from there.

Here’s another one. Everyone knows that Polaris is the North Star, and most know how to find it. So, how high is the North Star above the horizon? This should also be obvious, but few can answer it. The height above the horizon for the North Star, Polaris, is equal to the latitude that you’re observing from. Is that important? It is if you’re an explorer; you find the North Star, and now you know your latitude. Nowadays, many of us do not have the spatial connection to figure that one out. People once did, when the Cosmos/ Night Sky was part of their world. And they can have it again; this book helps to bring it into reach.

It works for natural history as well. For example, what is the difference (and there is one) between a seal and sea lion. Think about it. ‘If it walks, it’s a sea lion; if it moves by bouncing along like a blubber slug, it’s a seal.’ I often show a picture of a trained seal at the circus, balancing a ball on its snout and then show a video of it walking; yes, the trained seal is a sea lion. You’ve probably learned something, and hopefully I’ve engaged you at the same time.

We’ll conclude with the scale of the Universe, a real important one, because that’s the real connection – us to the vast ‘everything up there that seems to go on forever.’ We all know the Universe is huge, but how huge is huge? Standard teaching methods start with ‘It takes a million Earths to fill the Sun,’ but it’s really difficult to imagine a million Earths. Then there’s the ‘if the Earth were the size of a marble, then the Solar
System would be 7 miles wide.’ That’s better, but still awkward to relate to. I remember from my Antarctica guiding days, I would state that the wingspan of the Wandering Albatross was over 11 ft. I’d look at the group and see blank faces, and after a few trips with the same reaction, it dawned on me. People somehow couldn’t register 11 feet at the gut level. That had to be it, I figured. So during my next lecture, I stated the maximum wingspan of over 11 ft. and then asked a guest to stand in the corner of the room. I then handed her one end of a piece of string and I moved away from her until the 11 foot piece of string was taught. ‘This,’ I declared, ‘is the length of the wingspan of the Wandering Albatross.’ The oohs and aahs came from everywhere. The Wandering Albatross is a magnificent bird, with a wingspan over 11 ft., which the male uses in courtship to “impress” the female. ‘Why didn’t you tell us the wingspan was that big?’ Amazing! Conclusion – it was hard to somehow effectively visualize 11 feet. How in the world were you going to get across the concept of a light year, even when you said it was equal to 6 trillion miles? So here’s what I came up with.

Most people have seen images of the International Space Station. It’s traveling at approximately 17,000 miles per hour and orbiting the Earth every hour and a half. So I made up a little story, and it goes like this. The astronauts must be bored with the view; they’ve been up there several months. I’ll bet they’ve heard the news that we just found a possible Exoplanet on Proxima Centauri, the closest star to Earth (aside from the Sun of course). It’s about 4.4 light years from us, which sounds pretty close, but a light year is about 6 trillion miles! So, not so close. Anyway, this potential Exoplanet is in the habitable zone of the Star, what astronomers also call the Goldilocks Zone – you know, not too near, not too far, not too hot, not too cold – just right! So the astronauts have a little talk and decide maybe it would be fun to visit Proxima Centauri. After all, it is Friday and they do have a good happy hour there. Sounds like a good idea. So how long do you think it would take the ISS to get to Proxima Centauri, assuming good weather conditions and no traffic? Everyone is astounded to hear the answer is over 150,000 years! To the nearest Star. Out of the hundreds of billions of Stars in the Milky Way Galaxy. And there are hundreds of billions of Galaxies in the Universe. It’s that vast. People do envision the astronauts in a real spacecraft, the International Space Station. They also envision a Flight Plan to the nearest Star. But they don’t envision it will take anywhere near that long to get there. It’s a real point of connection.” 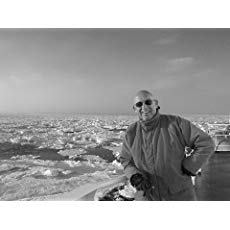 Barry Boyce was a graduate student in the neurosciences. He has over 30 years teaching natural history and astronomy on an outreach basis on expedition voyages to the Galápagos Islands and the Antarctic; he currently teaches outreach astronomy for the University of Arizona at their Mt. Lemmon Sky Center. He is also an astrophotographer, a nature photographer, and the author of A Traveler’s Guide to the Galápagos Islands. Barry Boyce can be contacted directly at [email protected] / www.barryboyce.com