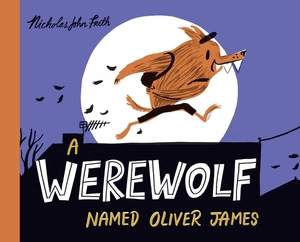 Oliver James is waiting for the bus home after band practice one day when suddenly all his friends run away. After a few more such encounters Oliver sees his own reflection and realizes he’s become a werewolf! Rather than begin frightened, Oliver is thrilled with his new abilities and wants to share with his friends. However, with everyone frightened of him on sight, his joy begins to sour. How can he return home to his parents when they’ll likely be afraid of him too? Luckily, it isn’t a problem as Oliver’s parents are werewolves too!

A Werewolf Named Oliver James is an adorable children’s book. The illustrations are simple and charming, and the author kept the palate equally simple with all pictures illustrated in the same limited scheme as the cover of the book. While the book does raise some questions in my adult mind (how did he not see his parents transform before, and why did his parents not have a talk with him about his nature because that just seems like bad parenting), children will enjoy Oliver’s enthusiasm with his new form, and will love the reveal that his parents are werewolves too! This is a charming tale, perfect for Halloween, but is also one that can be read with joy year round.