Without a Net: The Female Experience of Growing Up Working Class edited by Michelle Tea 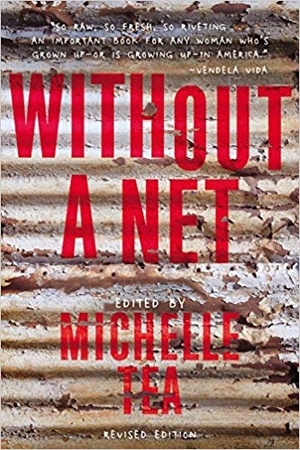 As several of the nearly thirty essayists mention editor Michelle Tea’s collection Without a Net: The Female Experience of Growing Up Working Class, the very fact that they’re writers gives them a certain privilege, perspective, or both not shared by their parents or people who still live in the projects they’ve left behind. Even though writing notoriously doesn’t pay well (without achieving celebrity status anyway), they have a platform that those stuck in the daily grind do not.

Still, anyone who shudders at the thought of checking their outstanding student loan debt, has skipped meals out of financial necessity, and understands what it’s like to be one step away from homelessness will likely find corollaries within these essays to their own lives. The writers are aware they’re not alone, that they’re the lucky ones. These individual accounts speak to the prevalence of racism, classism, sexism, and gentrification that make it almost impossible to transcend class in our society. Terri Griffith writes:

“What about the American Dream, the theory that with hard work and perseverance people can transcend the class into which they are born? I want to believe in it, but I don’t. Class is about more than money; it’s about safety and security, knowing that what you have today, you will have tomorrow.” p. 98

Some go even further with their assertions. Siobhan Brooks writes:

“With inferior school systems and housing, the projects were often a prelude to the final form of incarceration: jail and prison.” p. 44

Without a Net is an important collection of working-class voices to add to the politicians and pundits’ conversation about health care reform, affordable (safe) housing, and living wage employment.