Finding Purpose in a Godless World: Why We Care Even If the Universe Doesn’t by Ralph Lewis, MD 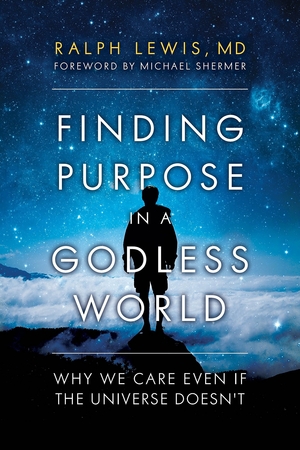 This reviewer believes that Finding Purpose is an important book for people who might retain belief in a Supreme Deity ‘just in case,” or they can’t imagine a full life without the support of a master planner, or if they just would like to bolster their unbelief in a deterministic world. It should surely regarded as in the top four or five.

Dr. Lewis is a psychiatrist, which exposes him to the full range of the human condition. Also, he has experienced the trials concerned with his spouse’s aggressive cancer and some deficits of his own. As he admits, he’s not always attained his unshakable commitment to a belief in a universe that doesn’t care about him, but he was sustained by others: Doctors, family, and friends and emerged from the ordeal with his insights intact. Proof enough that we can provide for each other what the universe lacks.

If there’s a single most important idea in the book, its emergence: From the stipulated, (if you will) big bang, the universe and all of its laws and properties, the stars and planets emerged. From the basic elements, life emerged. From life, the myriad forms evolved including, finally, our own and from life emerged consciousness.

In the last few years there have been important advances in research that diminishes the idea of brain/body dualism, and that’s the starting point. If we don’t have half of ourselves that survives the body, there’s no afterlife, and so everything that we are, we’re born with from a long evolutionary lineage. Finding Purpose aims to make this situation not only tolerable, but uplifting and empowering.

The book is in five parts beginning with the reasons that we believe that each of us is part of a plan. Basically, it’s because we evolved to see patterns and agency in the world around us. In the beginning, it was to spot and avoid dangers but now leads us to see the same, but in a much wider perspective, including seeing patterns in every day occurrences that don’t necessarily fit with reality. This idea that evolution shaped our minds, as well as our bodies, continues to the finer points such as empathy, cooperativeness, sacrifice for the group, and all of the human traits that we share with everyone in the world.

The author gives us a well-reasoned and well-supported alternative to the supernatural realm being responsible for who we are as humans. If we can’t say “the Devil made me do it,” neither do we need to say “God helped me do it.”  Credit or blame, it’s all ours, or as the last two lines of the poem “Invictus” by William Ernest Henley puts it, “I am the master of my fate: / I am the master of my soul.”

Pretty heady stuff, but Finding Purpose will help us deal with life and death, in a confident and steadfast way.