Selling to China: A Guide for Small and Medium-Sized Businesses by Stanley Chao 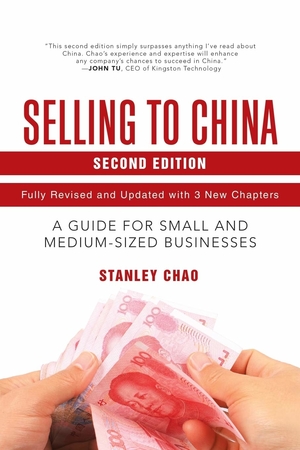 If you own or run a small to medium-sized business and have been considering doing business in and with China, then Stanley Chao’s Selling to China may be a great resource. This isn’t going to be a quick read, although Mr. Chao clearly does what he can to present his points in as concise a manner as possible. The advice given is also very clearly based upon the author’s own personal experiences, which may vary greatly from someone else’s.

The book is broken up into three main parts: The Cultural and Practical Realities of Doing Business in China, Building Your Action Plan, and Everything You Need to Know in a Nutshell. Each of these parts is divided into several chapters, and all but the last two chapters have a convenient summary at the end. The book also contains a short glossary of abbreviations and terms that are frequently used in the book, although this is more required reading than a resource since the author doesn’t take any time within the chapters to explain what the abbreviations mean.

The first part of the book basically gives a crash course on aspects of Chinese culture, such as Guanxi and Mianzi, explaining how these can fit into making deals, but that times are clearly changing and while it is good to be aware of various cultural aspects (such as extended business dinners for wooing foreign clients), they’re not necessarily as important as they used to be. While a number of the tips in this first section are catered to dealing with China, there are some more generalized business practices that would be useful in other countries as well. The second part focuses more on the nitty gritty details with regards to balancing the costs and profit margins involved in making such a large business move. This section would be particularly useful to some businesses as Mr. Chao blatantly states that some products are just not worth the effort based on demand, and how easy the items are to forge. The third section functions as a prolonged summary of the rest of the book, as well as offering some common business terms, and last-minute suggestions.

That the author doesn’t just argue that businesses across the board should definitely try selling to China is nice to see given the potential risk should a small business fail with such an expansion. The book does seem biased against the Chinese Mao Generation, but again, this book is based on the author’s personal experiences in his own trade and business negotiations. Selling to China: A Guide for Small and Medium-sized Businesses is not going to be for everyone and was very clearly written with a specific audience in mind, but is potentially a valuable resource for that audience.

Q. You state in the introduction that you’ve based this book on your own personal experiences. What was your inspiration to publish this guide?

A. Throughout my career, I kept seeing companies make the same mistakes over and over again. So instead of solving the problems over and over again, I decided to write this book. The issues in the book probably pertain to just about any company, big or small, that has or will do business in China.

Q. I was impressed with how well-organized Selling to China was. How did you decide on the structure of your book?

A. I can’t take all the credit as I had some good editors help me along the way. Part 1, “The Cultural and Practical Realities of Doing Business in China,” describes everything you need to know before going to China. Part 2, “Building Your Action Plan,” tells you what you need to do when you’re actually in China—having meetings, deciding on distributors, or registering a Chinese company. And Part 3, “Everything You Need in a Nutshell,” provides a 30,000-feet-high view of China. You can read each part separately depending upon your company’s China situation.

Q. I noticed that this was a second edition; what was something you decided to change between your initial publication and this new edition?

A. My first edition came out in 2012. Back then, China was still an emerging economy. Today, it’s between a developing and an advanced country. These drastic changes require different business strategies, so I had to rewrite and revise my advice. I’m sure I’ll have to write a third edition in 5-7 years. However, by that time, China may be so modernized and Westernized that businesses won’t need high-paying consultants like me. China will be doing business just like Western countries.

Q. In your experience, what is the biggest misconception people have with regards to doing business with China?

A. I see two big misconceptions. First, small and medium-sized businesses still think China is only for the big multinational companies, and that you need millions of dollars to invest in China to be successful. Not today. China is accessible to all kinds of companies, big or small. For example, a small American company I’m working with—a five-employee bakery that makes homemade fudge—has become quite well known in the Shanghai area, and their China sales now make up over half of their annual revenue.

Second, people still think China is a difficult place for foreigners to do business due to the social, language, and political differences. Yes, China is different, but not that much. It’s like playing poker, but now the 2s and 4s are wild. Once you learn the new rules and gain some experience, you’ll have no problem maneuvering the challenges that China presents.

Q. With the current political climate and people debating the creation of laws to entice businesses to move back to the US, do you still see China as a viable move for businesses that have not yet made the jump?

A. Most definitely. I see two political and economic spheres developing. One will be the US’s sphere of influence. The other will be China’s. If you stay in the US, you’ll only have access to the EU, North America, and some South American and Asian countries. Doing business in China will give you access to the other parts of the world—Eastern Europe, Africa, and the rest of South America and Asia. So it’s not about “either/or” now. Your business needs to be in both the US and China to have access to the world.

Q. What do you say to readers that think you may be too harsh on the Mao Generation and their behavior with regards to business?

A. That’s the number one criticism I get from readers, and I suspect it’s from those who haven’t actually done business in China. I’ve spent about 30 percent of my time assisting Western companies in avoiding the chicaneries of Mao Generation business people—nepotism, kickbacks, bribery, and money laundering. It happens so often that I’m shocked when a Mao Generation individual hasn’t ripped off a Western company.

Q. As the Mao Generation ages out of the work force, have you seen any significant change in business relations?

A. China will be a better place when the aftershocks of Mao’s regime and his Cultural Revolution finally die off, which will be in another 20 years. But I’m already seeing a better business climate, especially in the industries led by the thirtysomethings—internet, semiconductor, and software. These individuals speak fluent English, have spent time abroad, and have strong ethical and moral values. China’s future is very bright.

Q. You offer quite a bit of advice for businesses considering working with the Chinese, but is there one thing in particular that you would consider the most important point to take home from this book?

A. Successful Western business people rely on trust and instincts to drive their decision-making. They sometimes discard the facts and go with their “gut feelings” about a person or a transaction. You can’t do that in China, at least, not today. Using your “gut” in China will just leave you with indigestion. In China, we’re still dealing with a society, the Mao Generation, that were brought up with different social backgrounds, educations, and ethical values. Given these differences, you can’t possibly develop a sixth sense about them.

A Chinese American and son of Chinese immigrants who escaped from the Communist takeover of China in 1949, Stanley Chao grew up in California in a very traditional Chinese family: living with three generations under one roof, speaking only Chinese until grade school, and learning that anything less than an A grade was unacceptable, and that working hard was the only way to get ahead in life. Chao holds a BSEE degree from Columbia University, an MSEE from the University of Pennsylvania, and an MBA from the UCLA Anderson School of Business. His professional career includes stints at Philips Lighting in California, and China; Kingston Technology in California and Japan; SoftBank in Japan; and Merrill Lynch in New York and Japan. He speaks fluent English, Mandarin, and Japanese and currently resides in Los Angeles.

Chao is the Managing Director of All In Consulting, a Los Angeles based consulting firm assisting Western companies in their Asia and China business developments. Chao’s clients include: Intel, Emerson Electric, SPX, Kingston Technology, Baxter Healthcare, and dozens of small and medium-sized companies. Chao and his team have conducted over 200 projects in China covering more than 12 different vertical markets including the aviation, automotive, medical, information technology, manufacturing and environmental engineering industries.