The Undertaker’s Daughter by Sara Blaedel 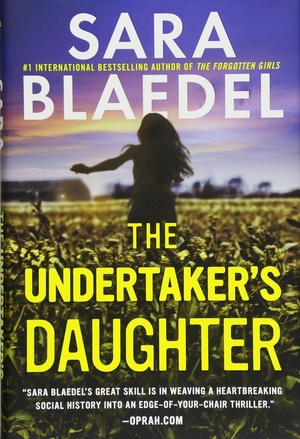 Ilka Jensen and her mother Karin live in Copenhagen, Denmark. Ilka works as a school photographer. They were abandoned by Ilka’s father, Paul, when she was seven years old. He moved to live in the United States leaving large debts including a funeral home. The only communication after leaving was when he sought a divorce. Now (thirty-three years later) they have received notification of his death and that his will leaves his American funeral home to Ilka. Ilka decides to go to America to sell the funeral home, deal with his possessions, perhaps learn a little about him and return home to Denmark. When she ultimately arrives in Racine, Wisconsin, where he lived, Ilka discovers a second family, a funeral home she owns and is liable for the significant debts of the business. She is rapidly pressed into the management of the funeral parlor, though she knows nothing about undertaking, has two employees, works on establishing his debts and trying to sell the business. As the story progresses Ilka learns about the business, dealing with the debts, interacting with the mourners and the employees. One of the bodies they must prepare is a murdered man which adds complications to her efforts at preparing the business to be sold.

The murder mystery elements are parts of the story but not the primary focus. Throughout the story Ilka shows increasing confidence and grows as she struggles with her responsibilities. While the ending for some may be unsatisfactory because Ilka’s life is not wrapped up in a nice package with a bow, which may be due to a potential sequel, the experiences and decisions of Ilka as she learns about a new and different life are quite interesting and entertaining. Her struggles with learning a new business as well as adapting to the cultural differences add another element to the story. This was a novel that I read quite quickly. The writing was very visual, allowing me to fall into the narrative with great ease!