Where Eagles Dare Not Perch by Peter Bridgford 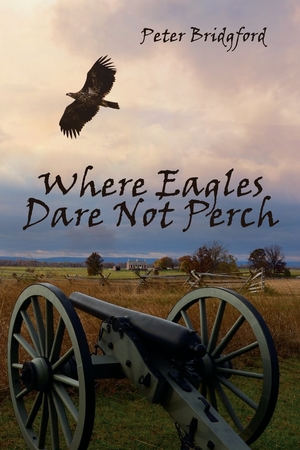 Peter Bridgford’s Where Eagles Dare Not Perch is an engrossing historical fiction novel set during the American Civil War. Zachary Webster, only days away from being sent back to the front lines with the rest of his company, murders Jonathan Stiller in cold blood for the crimes of stealing away his sweetheart while he was at war. With no witnesses, Zachary heads back to the front lines. However, Jonathan’s brother Jedediah was aware of his brother’s infatuation with Catherine, and surmised that Zachary may have killed him. Determined to avenge his brother’s death, Jedidiah heads south after Zachary and his sharpshooter regiment. Meanwhile, Catherine realizes that her seemingly harmless flirtation with Jonathan caused his death, and loathe to be indirectly responsible for any more lives, she too heads off in pursuit of Zachary.

The book is written with alternating chapters between the three primary protagonists, and as such, the pacing is continuous and driving, making this a difficult book to put down. None of the protagonists are particularly likeable as they are depicted as very flawed humans, however, this does not lessen the reader’s interest in their story or their fate. These are fully fleshed-out characters, with their own hopes and dreams, past experiences, and ways of coping with what life throws their way. Bridgford doesn’t pull any punches with regards to the darker side of humanity (both in general and what would be expected based upon the time period), showing the violence and gore on the battlefield, the rape of women, the belief in holding our fellow man in slavery, and the darkness we can hold inside. This isn’t an easy book to read, but those that do will be well-rewarded. Despite the violence inherent in the novel, the book is surprisingly a novel of redemption and forgiveness, although such things are sometimes found by our characters in unexpected ways.

Where Eagles Dare Not Perch is a well-written historical fiction that readers interested in Civil War era stories should not miss.