Yeti: The Ecology of a Mystery by Daniel C. Taylor 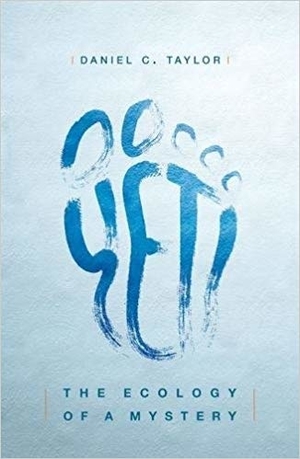 In the mid-1950s, when Daniel Taylor was a schoolboy growing up in the Himalayas of North India, he was assigned to write a paper on any subject of his choice. “At first,” he says, “I thought I’d do tigers―tigers were the ultimate quarry for Taylor boys―but I decided to write about Yetis.” That choice, that paper, was his first step in what became a lifelong quest to discover the truth about the mysterious critters. His quest has taken him on many trails and, ultimately, to writing his insightful memoir, Yeti: The Ecology of a Mystery.

“The Yeti is more than just a footprint,” he says. How much more, both really and physically, and metaphysically, is what this natural science study is all about. The mystery of the yeti began during a 1920s British Himalayan expedition with the photograph of what appeared to be the footprint of a large hominid-like creature. Combine that photo and others taken over the years with myths, legends, and startling true-life stories of encounters with yetis told by Himalayan folk, such as the Sherpas of the Mount Everest region, and you’ll understand why he calls it a mystery. Taylor’s breakthrough discovery of yeti-reality came after years of careful search and research. The book sometimes reads like a detective novel, chasing clues. Is it some heretofore unknown creature, maybe prehistoric, hiding out wild in the Himalayas? Or, does it have a more rational explanation?

In Yeti, Taylor guides us on a series of exploratory treks to find out. His revelations are strengthened by his lifelong work in nature conservation and education, and many years tramping across north India, Nepal, Bhutan, and Tibet.

And what does he tell someone else who wants find the Yeti, or any other strange beast, rare bird, puzzling plant form, or another unexplained phenomenon? His advice is like Kipling’s: “Do it! Go for it. Find it.” Go out “with a packsack on your back, and an open mind.”

And what are Taylor’s conclusions after more than a half century of research? To find out, I recommend you read the book, no matter if you hope to trek the mountain forests and snowfields to see for yourself, or if you prefer reading it at home by the fire as an arm-chair explorer. But be prepared, for it is such an alluring saga that once you start you may not be able to put it down ’til the book is finished, the mystery is solved, and you have learned something remarkable about both the beast and the man.