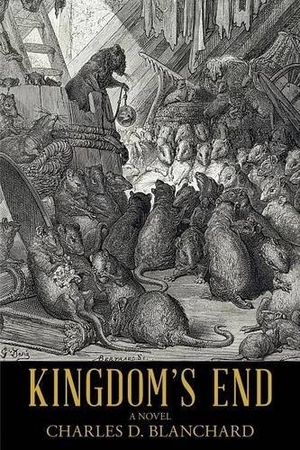 Charles D. Blanchard’s Kingdom’s End is a politically infused fantasy novel in which the main characters are rodents. Indio has ruled over his large community of rats for many long years with benevolence and is greatly loved by his tribe. Matthias, one of Indio’s most trusted soldiers has long harbored a desire to rule, and with Indio’s son and heir a less-than-inspiring figure, Matthias deems the time right to make his bid for the throne. Will his ambition bring prosperity or destruction to the community?

It isn’t often you run into books written for adults that feature animal characters anymore. While readers with a fear of rats may want to avoid the title, the book actually offers plenty of intrigue, adventure, and a diverse cast of characters for readers to follow. This cast diversity will either be a boon or a detriment depending on the reader. There are quite a lot of characters to pay attention to, and few of them are really integral to the plot. Some of the others add interesting side narratives that flesh out the world and are interesting, but are ultimately unnecessary. It’s also unlikely that readers will develop deep affection to the characters, which may be by design; rats and other rodents rarely live long lives and as such death is a constant companion in the narrative. Many of the characters appear only briefly before their violent end and only grieve briefly as well. Character motivation for the majority of the characters is simple, which is to be expected given the basic drive for rodents is food, breeding, and shelter. Matthias’ drive to rule does seem to come out of left field, since the first long chapter we’re exposed to him he demonstrates none of the cruelty or ambition that suddenly appears later. It’s implied later that he’s long harbored a desire to take over from Indio that is potentially tied to his lineage, but until the author states as such it’s impossible to tell.

The driving force of the novel is the plot, which has multiple threads. While Matthias’ plot and confrontation with Indio and his sons is a major thread, there is also the mouse Chantal, and the rats Bartholomew, Wilbur, Edgar, Jericho, among others, as well as a few humans on the peripheral. Some of these threads tie back into the main plot, while others peter out and could have been removed entirely without affecting the story. The biggest weakness to the story is the addition of the fortune telling rat. While her guidance may be beneficial to the rats themselves, for the reader her advice ends up spoiling the main plot in its entirety. It would have made for a stronger and more engaging tale had the fortune telling aspect been removed from the narrative.
All said, Kingdom’s End is a fun concept with plenty of action for readers who can get past the aspect of reading a tale focused on rats and other rodents. The story doesn’t pull punches when it comes to the many ways rats meet their end and the numerous hazards they face from the larger world, let alone from each other, so prospective readers should be aware of the degree of violence they are getting into. This is an interesting book of the sort that we rarely see, and will certainly be a grand adventure for some.