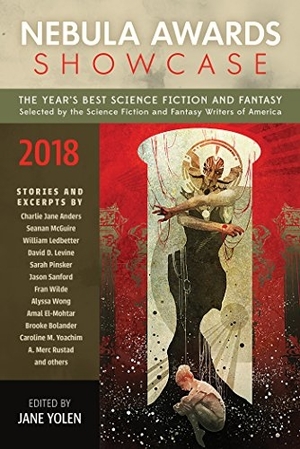 The Nebula Awards Showcase 2018 stands out from the many other science fiction and fantasy short story anthologies, not just because the Nebula Awards are the best of the best in genre fiction, but because each anthology is slightly different. Where many anthologies give you at most a short summary of the author, but little background information, this anthology makes readers feel like insiders in the often labyrinthine world of sci-fi. Each anthology includes an introductory text from the Grand Master from the year the stories were considered for the award (because of publishing times, there is often a delay. These stories come from the 2016 awards, although the book is a recent release). The 2016 Grand Master was Jane Yolen, who is not only an accomplished author in her own right, as all the Grand Masters are, but has a knack for making the reader feel like a co-conspirator, and revealing intimate, behind the scenes details, without feeling like a tell-all. This anthology is also specifically focused on the awards, so it includes lists of the nominees, even if the excerpts aren’t included in the text. This may be of little to no interest to many readers, but again, it creates a context for these stories, and even without examples, some readers may be interested in who was also nominated. When you get to the stories themselves, each story or excerpt starts with an author bio, although these tend more toward the whimsical than your standard author bios in many cases. The volume reproduced the short stories in their entirety, with excerpts from the novelette, novella, and novel categories.

The reader who is interested in this text may seem kind of obvious, as it is designed to appeal to readers who are already immersed in sci-fi or who are at least reading genre fiction. I would encourage a broader range of readers to try this text, however. The short story format makes it a quick read, and if you try something new and don’t like it, you aren’t committed for the length of a novel. Speculative fiction is also moving in a more diverse direction, and the stories in this volume aren’t just the stereotype of aliens and laser guns. New sci-fi authors are incredibly diverse, and that diversity is reflected in the characters and stories. Many of these stories are written by female and queer authors, and the characters are equally diverse. The majority of these stories reflect that background in the settings, the storytelling style, and the characters themselves. That said, if readers are looking for very traditional forms of sci-fi, this text likely won’t appeal. The more diverse stories are also more complex, and although short and quick to read, they stay with the reader. This text may also annoy completionists. While obviously reproducing a whole novel is not possible in this kind of anthology, and generally the excerpting has been well done, there are a couple of points where it is obvious that what you’re reading is part of something larger, and you feel the lack of the rest of the story. Ideally, this would encourage the reader to seek out the longer novels, but it could be a temporary irritant in the moment. Overall though, the stories are beautiful, and many of them excel at creating compelling plots and characters in a limited scope. Short fiction can be hard to access without serious effort on the part of the reader, and I would encourage readers to seek out this volume as a wonderful entry to a underrepresented world in literature.