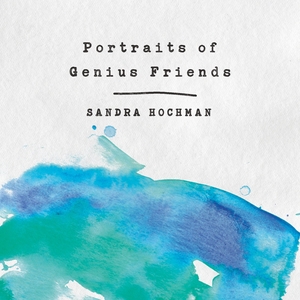 Every reader of Sandra Hochman’s Portraits of Genius Friends seems to walk away saying “She knows everyone!” and it was true. Hochman, the award-winning writer seems to know just about every important literary and artistic figure in mid-20th century New York. And they were her friends, not just idols or collaborators, although they were occasionally also these things. Like with your best friends, Hochman saw her friends clearly, remembering not just their genius and achievements, but their flaws and quirks of their personalities. There are two forms of portraits in this book-a short written recollection of the author’s relationship with the person, and a visual image, mostly done in watercolor that attempts to capture the person.

The written recollections to largely focus the relationship between the author and the subject of the portrait, and, thanks to Hochman’s skill as a writer, they are beautifully written, often capturing a moment in the person’s life with a brilliant poetic clarity. However, because they do focus on the relationship to the author they also occasionally come across as slightly self-indulgent, with an air of a well-rehearsed story told at one too many dinner parties. Also, while the vignettes occasionally reveal quirks they are rarely details that aren’t publicly known or part of the figure’s public image.

The paintings are largely abstract images, influenced by the style of the mid-20th century. When they do have recognizable imagery, they are often caricatures, which serve as a reminder to the reader that these are public figures. Technically, the paintings are well done, and one of the most enjoyable pieces of the book is spending time with these unique and creative images.

Ultimately, this is a not a book that will appeal to every reader. The readers who appreciate it most will have an in-depth knowledge of one or more of these figures, and will be able to appreciate the snippets of personality that make it into these pages. Neither the written summaries or the images are revealing enough to be satisfying to readers without sufficient background knowledge. At the end of the day, this is a connoisseur’s book written by an insider, for an insider.