The Fandom by Anna Day 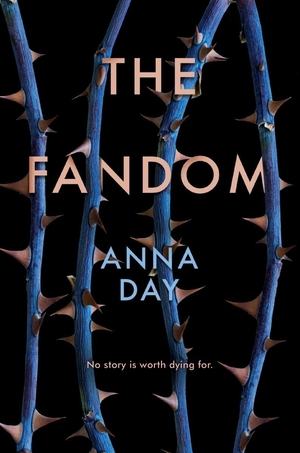 Anna Day’s, The Fandom, is a young adult novel that combines adventure, fantasy, and four friends that are transported into the dystopian world of The Gallows Dance. Violet and her friend, Alice, are fans of the novel and film, The Gallows Dance, and with her friend Katie, who has not read the book and her brother, Nate, they head to Comic-Con to meet the actors who play their favorite characters. Shortly after arriving at Comic-Con, however, Violet and her friends are transported into the world of The Gallows Dance, where those that are perfect and genetically enhanced are at war with those that are seen as imperfect. These imperfect Imps were starting a rebellion against their Gem suppressors when Violet and her friends accidentally caused the death of The Gallows Dance’s heroine. To escape and survive the novel, Violet must take on the role of the heroine, however, the story that she thought she knew by heart has much more backstory than what was written.

This novel is told through the first-person point of view, where Violet’s narrative is told within the setting of the fictional book that has created a huge fandom. When the reader first meets Violet, she is shy, however, throughout the story she must overcome obstacles in The Gallows Dance to keep her friends and brother safe. Her friendship with her brother heavily influences the novel as Nate helps her prepare before every encounter, rehearsing lines from the original story to survive each scene. Her friendship with Alice is tested during their time in The Gallows Dance and Violet must complete the original story arc within a week in the hope of getting home.

Day’s novel starts with a prologue, already providing suspense as well as intrigue about the fate of Violet and what she will have to overcome in her new reality. The world building is unique, where each character Violet meets has differences from the original story’s characters. These differences are acknowledged through Violet and her friends’ usage of knowledge from the book and film. The theme of social injustice fuels Violet as she experiences the horrors of life as an Imp and suspense is added in the novel when events do not unfold the same as the original storyline.

While the ending is fast-paced and could be expanded upon more, it adds more depth to the magic and world building of The Fandom, filled with creative concepts, a few twists, and friendship. Readers that like adventurous tales with unique fantasy concepts and a dystopian setting will enjoy this creative read.