The Fire Pit by Chris Ould 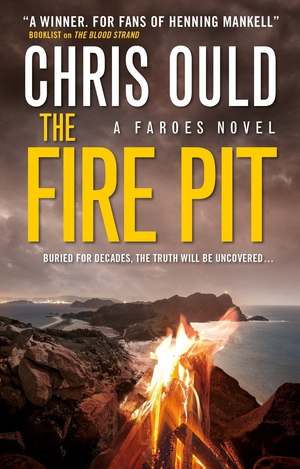 The Fire Pit, is the third book in The Faroes Novel series. Detective Hyalti Hentze, a Faroes detective is following up on an apparent suicide of a man riddled with cancer who was also an alcoholic. Called to the desolate, windy hillside on land owned by the suicide victim, Hentze learns about bones being discovered there found in a shallow grave. He suspects they may belong to a young Norwegian woman missing from this area nearly forty years ago. About that time, a commune had occupied the area and a young local woman had gone missing. Meanwhile, the Danish detective Thomas Friss, follows up on leads he suspects are linked to a possible serial killer. English detective Jan Reyna, has come back from an internal investigation, to investigate the death of his mother and her suicide. The more he learns about his mother and her last forty years, he realizes that these two cases have things in common that include a conspiracy of abuse, drugs, murder. Reyna and Hentze find themselves embroiled in a heated mystery that also explains the theories of Thomas Friis too.

This Scandinavian adventure is a true crime and thriller story. It includes Nordic Noir, written in plain language from the police point of view, with prevailing moods. The author, Chris Ould, has developed an intricate plot with several story lines that is well developed and has good suspense! The characters also have strong development over the course of the story. Ould uses vivid descriptions of the Faroes Islands including the people, the weather – the constant wind and rain and overcast skies – as well as the culture. This is a stand-alone book, but reader beware, you may enjoy your experience so much that you may find yourself hunting down Ould’s other novels as well!