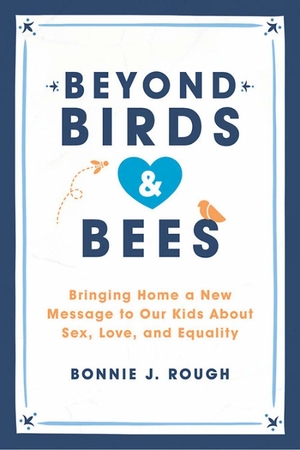 This book is a five star mind-bender and an eye-opener.

America has its own, exceptional, ways of looking at things and sex education is one thing that is exceptionally poorly done in America. We suffer from elevated levels of unintended births, teenage births, sexually transmitted infections, and strident disagreements about what to do.

According to our author, these obvious ills are just the tip, albeit an important tip, of the iceberg. The absence of early, comprehensive sex education can be reflected in increased divisions and lack of respect between men and women resulting in inequality, a mutual lack of understanding, sexual abuse, and rape. So how can we do it differently? While there are some changes happening in U.S. sex education programs, progress is woefully slow and uneven. A look outside our borders might be in order.

Bonnie Rough moved with her husband and first little girl to the Netherlands where she immediately noticed a more relaxed atmosphere; particularly, for her, the freedom from the “male gaze” often encountered by women in America. This, along with the lower statistical rates for the aforementioned sexually related problems suggests that the Netherlanders may have found a better way to foster better gender relations than the way we in the U.S. do it now.

So, as the author puts forward, does early and comprehensive sex education make that much difference? It seems like it very well might. In the Netherlands, sex education begins at four years old in kindergarten. But it’s not just about sex. It’s about the sexes being raised together. They’re encouraged to work and play together, not only as children but throughout their growing up years. This fosters knowledge about each other and supports the respect that knowing about their opposite sex friends brings.

The more relaxed attitudes extend to, from the early ages, playing doctor, self-discovery (touching), and different-sex play dates including non-sexual sleepovers into the teen years. While this strikes fear into the hearts of American parents, the Netherlanders maintain that the children’s innocence is not lost. These activities are not sexual or “dirty” and are just natural expressions.

In the conclusions chapter the author gives a very informative schedule, if you will, of age appropriate behaviors starting with babies and toddlerhood and continuing in stages, to adolescence, and even touches on the final chapters of discovery: having sex, with parental knowledge, in the comfort and safety of their own home.

The author, by her own account was not a libertine or advanced for her age. At every turn, she came up against an attitude or a situation that called for a shift in her perceptions. Beyond Birds and Bees candidly follows these surprises and the shifts in her thinking that living in the Netherlands gave her. By sharing her experiences, as well as her subsequent studies, she hopes to lead us toward a more relaxed and equal society that also prevents the less desired life altering events that ignorance allows.

This reviewer has long thought that it’s not un-American to look around and perhaps adopt the “best practices” of other nations and cultures. Beyond Birds and Bees is a worthy example and I encourage you to check it out and decide for yourself.