The Boy Who Went Magic by A.P. Winter 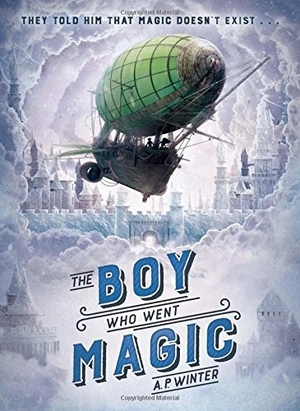 A. P. Winter’s middle grade, fantasy novel, The Boy Who Went Magic, is a tale of ancient magic, a scheming royal prince, adventurers, a boy learning how to be brave, and flying ships. Bert, an orphan who grew up at a boarding school, goes on a field trip with his classmates to the Penvellyn National Museum to view an exhibition on the fraud of magic and mages of Ferenor. While Bert is on the museum tour with the pirate Professor Roberts posing as a guide, he encounters a magical artifact and is questioned about his role in Roberts’ escape. Bert peaks Prince Voss’ interest who is obsessed with power and magic. Soon Bert finds himself on a dangerous adventure with Professor Roberts and his daughter Finch, as they try to figure out more about the mark that was left after his encounter with magic. They must be careful not to draw attention to themselves because Prince Voss is searching for Bert.

This story follows Bert’s development from someone wishing he was on adventures to being brave enough to venture out on his own path. It is told through the third-person point of view and showcases Bert’s thoughts and feelings as he discovers more about himself and the magical mark he has. In the first chapter, the reader meets Bert when he is first dropped off at school, which sets the tone for a mysterious tale of a world where most do not believe in magic. Bert’s dreams of going on adventures like those from the myths cause him to be isolated from his classmates, who bully him about his belief in magic. Bert is a character that many readers will be able to relate to.

There are some humorous scenes in the story, including the visit to the Penvellyn National Museum which showcases Professor Roberts’ character in disguise as a tour guide, while later revealing the clever pirate that he truly is. The magical occurrence helps add irony to the exhibition that claims magic is fake and Bert’s school teacher as well as classmates’ reactions to the Professor’s tour and magic are enjoyable. There are some fun moments in school after the magical occurrence that add to the world building as well as character development of Bert and Finch, displaying Finch’s strong-will and determination while allowing the reader to see Bert’s insecurities and how he reacts to events.

Once Bert leaves school with Finch, the pace quickens and sometimes the story’s world building is not as developed as it could be. With different lands being explored, the reader may desire more descriptive imagery as well as more information on all the different magical artifacts they come across, which would help elaborate on the history of Ferenor. Long action scenes that occur sometimes do not give characters enough time to develop after each event and might not hold the reader’s attention as well. More interesting pieces of insight about Bert’s family history as well as the magic of Ferenor is elaborated on at the end of the novel.