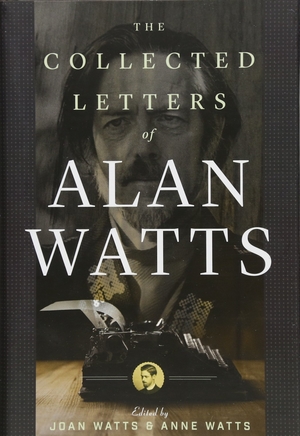 The late Alan Watts is an important figure in the intellectual and spiritual development of twentieth century American thought. Watt is best known as an interpreter and practitioner of Zen Buddhism during a time where this practice was not very accessible to westerns. Born in England in 1915, Watt became a key figure on the 1960s American counter-culture, and went on to inspire those of the late 60s hippy scene. Many phrases, ideas, and much of our contemporary obsession with eastern spiritual practices is due in part to Watts influence.

The Collect Letters of Alan Watts is a compendium that spans the vast life and career of the complex Watts. The book starts with a short forward and preface by his two eldest daughters – he had seven children – and the subsequent text is broken up into nine sections spanning 40 years. The early letters give us a school age Watts addressing his “Mummy and Daddy” and diving into thought. As the book progresses, we get to track the evolution of this thinker as he move away from upbringing and his priesthood in the Anglican Church to explore the counter-cultural revolution of the 60s.

The letters are engaging, but don’t necessarily hang together as a strong narrative. There is a good deal of repetition in subject matter and tone. While it is interesting to see the evolution of Watts’ thought and journey, one does better to read his book to get to the core of his evolving philosophy.

Watts corresponded with some big names (Carl Jung, Joseph Campbell, Gary Snyder, and Timothy Leary among others) and these exchanges are interesting, but the letters only go one way; the compendium is only of letters Watts wrote, and as a whole the book suffers because of this.

Overall, The Collected Letters of Alan Watts will serve scholars best. The book will be of some interest to those who have read deeply into Watts and want to know more (I have read every one of Watts books and was compelled as far as this book helped me understand the context surrounding those works).

Recommended for the die hard Watts fan, those who love collections of letters, but otherwise this book may be too niche to recommend to the general reader.