Finding Rosie by W. B. Edwards 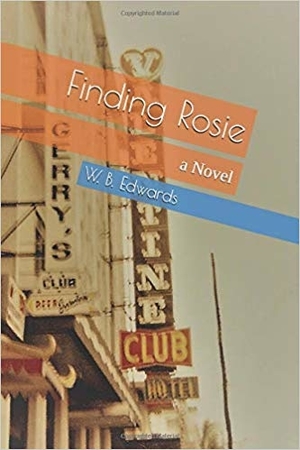 Paul Sutton is a bit of a wandering soul. Recently out of his tour during the Vietnam War, Navy Air Reserve, Paul is attempting to get back to a normal life. Yet, college and his girlfriend Mary don’t hold any charm for him, nothing really does… except for surfing. For a while Paul teams up with his buddy, Don, and they work so they can drive down to Mexico to spend the summer surfing. However, even then Paul feels like he’s still looking for something. A spur of the moment decision has Paul packing his bags for Australia, but there’s a brief stop in Manila and the temptation to reunite with Rosie, his companion during his deployment, has him wondering at the possibilities.

W.B. Edwards’ novel, Finding Rosie is a complicated, yet short novel. This historical fiction, part coming-of-age narrative is a brief look into a life that is struggling to find his place in a world affected by war. The book is written in several parts, which jump from the novel’s present time, back to Paul’s deployment, and back to present time again. It does a good job of evoking the joy and obsession many people find in the ocean, be it surfing, sailing, snorkeling, or deep-sea diving. The book touches on many of the realities faced by members of the military including the good and the bad, although this book does tend to steer away from the actual brutality of combat as Paul was stationed to work on a base. This is more a look at local economy surrounding the base; the bars, brothels, and markets that rely heavily on patronage by the enlisted soldiers, and the relationships that can grow or wilt in such environments.

This isn’t exactly a happy narrative, as Paul and Rosie’s love was never ideal, nor conventional. The novel ends abruptly, without an obvious lesson or real closure, but for a slice of life story that can make you think about your life choices, Finding Rosie is an enjoyable read.