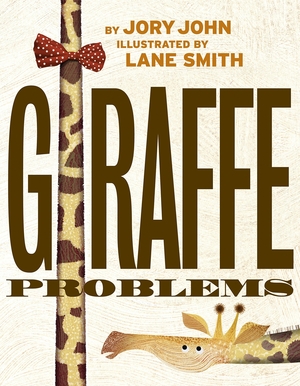 Edward is a giraffe with problems about his long neck. Yes, he can’t understand why it’s soooo long! He thinks its too “necky.” He seems to hang around the wrong critters who stare and talk about him, like the alligator, the ants, the birds and the “whatever that is.” He has tried to disguise himself by hiding behind different kinds of trees or by decorating himself with ties and scarves too. He seems a little pathetic until he discovers a new friend, Cyrus, a turtle, who has his own set of problems that he calls his “short comings.” Cyrus is envious of Edward’s long neck. He explains to Edward how happy he would be if he had a longer neck too. Cyrus helps Edward to realize just how special he is and a new friendship begins to blossom between these two opposite creatures!

This story is told with humor and is a delightful read. It is a large nine by eleven hardcover book with a funny giraffe drawing of Edward on the cover. The Lane Smith’s illustrations are fun and colorful, perfectly designed to keep youngsters looking eagerly towards the next page. The story teaches that even if people think they have a big obvious flaw that bothers them, their friends probably don’t even notice it – a body positive message for kids. This is a great story about friendship and acceptance for who you are! This is definitely a book to recommend for story telling time!