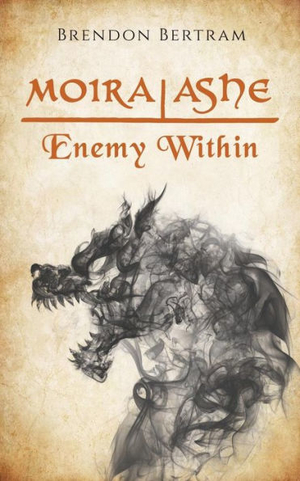 Lincoln Clarke has left his country in search of assistance for a worsening lycanthrope outbreak. As a physician, he knows that there must be a cure. He finds help in the shape of a werewolf hunter, Moira Ashe, in the village of Quinn. Moira agrees to teach Quinn how to hunt werewolves – for a price. Lincoln soon finds out that Moira is full of secrets and one secret may be the death of them both.

Moira Ashe: Enemy Within by Brendon Bertram is a book that has a solid and entertaining storyline. The plot is laid out well, has a nice pace, and has a few fun twists throughout. The character of Moira Ashe is complex and nicely written. She is a bit gruff, to the point, and not interested in playing nice. Lincoln Clarke is a less successful character, unfortunately.  He is written as someone who tends to make decisions without full information; he becomes angry when he thinks that Moira lies to him without confirming that she actually did. In a pivotal scene, he also betrays Moira without the benefit of any information from her about her choices. He has some character development and redeeming moments, but not before the reader has written him off. Thankfully, the plot overrides this character issue somewhat and the book ends up being a solid read.