Two Dogs in a Trench Coat Go to School by Julie Falatko, illustrated by Colin Jack 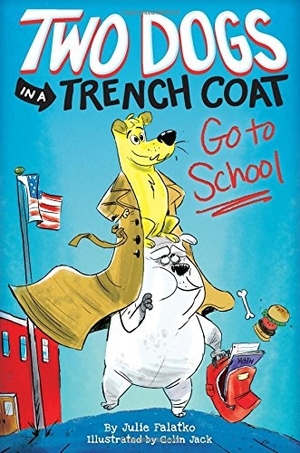 Sassy and Waldo take their jobs as dogs seriously. From neutralizing squirrel threats to maintaining a spotless, crumb-free house, they’ve got it covered. That’s why they’re concerned when they discover that their boy, Stewart, goes to this dreadfully boring place called school everyday. They do everything in their power to stop him from going each morning. Eventually, they hatch a plan to follow Stewart to school. By “talking human” and dressing themselves in a trench coat, Sassy and Waldo infiltrate Stewart’s school. Only Stewart knows who they really are. With the help of Sassy and Waldo, school quickly becomes more interesting.

Sassy and Waldo sound like what one would imagine their dogs would sound like if they could speak. Though the dogs can communicate with humans, their observations and mannerisms are still distinctly canine-like. Numerous amusing scenarios ensue as a result. However, Sassy and Waldo aren’t limited to providing comedic relief. They ultimately aid Stewart in realizing that school isn’t such a bad place. The story while captivating and comical also manages to send a positive message. Unlike other books for younger readers, this message isn’t obnoxiously emphasized. One of the few flaws of the book is that Stewart didn’t become an active participant in the story or in his education until the end of the book; even then, we don’t see him exert any effort. Despite this shortcoming, the book is an enjoyable, lighter read that provides insight into what the world looks like from the point of view of dogs.