Dogs on the Beach by Lara Jo Regan 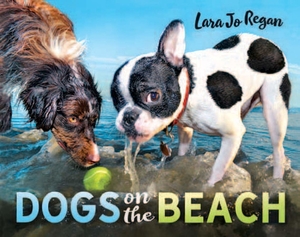 Dogs on the Beach is a series of photographs of dogs enjoying beaches. The majority of the beaches featured are in California however, a beach in Florida and a beach in South Carolina are included in the spread. Photographer Lara Jo Regan was inspired by the increase in popularity of dog friendly beaches. She captures dogs in the water, dogs playing with frisbees, and dogs of varying shapes and sizes. Mutts and purebreds alike are represented.

Pictures of the dogs don’t appear to be posed. Rather, it seems like the dogs are captured in their natural element. Consequently the personalities of the dogs shine through. The photographs offer a glimpse into the lifestyle of these dogs and their people. Regan’s lens will transport anyone familiar with these beaches back to their time on the beach. For those unfamiliar with the setting, the pictures offer a soothing escape into the world of dogs and beaches. Particularly for those readers who are far from beaches, flipping through this book might provide stress relief or at the least contentment. If you aren’t a dog lover, this book isn’t for you as it emphasizes the dogs over the setting itself. However, if you enjoy both dogs and beaches, this book will delight. Additionally, if used as a coffee-table book, it’s bound to be a decent conversation starter for dog lovers.