Drop by Drop: Step by Step, Book One by Morgan Llywelyn 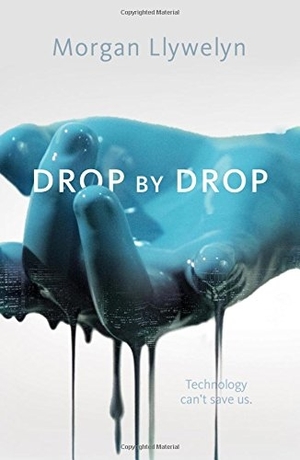 In a small town named Sycamore, a woman goes to her ATM, and her bank card disappears into the machine and out comes as a mess of goo! And so it begins, with pens and phones and tires and computer parts melting into a substance smelling of crude oil. Each day something else made of plastic begins to fail and this begins to happen across the states and then globally. The apocalypse begins slowly and its effect seems focused on plastics only. The people of Sycamore feel the effects and slowly begin to adapt to their new situations as they occur. When tires go and the roads melt, horse and carriage, with wooden wheels come back into vogue! People begin to call this new age “The Change,” as the townsfolk begin to speculate about the cause and the cure. But with this “change,” people are dying and humanity has to try to cope with these consequences. Crime is on the rise again as technology begins to fail and war is on the horizon. Will the human race be able to endure this changing world?

Drop by Drop is Morgan Llywelyn’s first science fiction novel and the start of a new trilogy! Not being a fan of science fiction, I was pleasantly surprised by the concept of the story, was drawn in quickly and read the book in its entirely. It was interesting to see how differently the characters reacted to their unique situation. Some thrived while others resorted to crime. I thought the concept of the story was great and am wondering if sequels will lean more heavily to the science fiction genre as this was rather mild. Recommended for science fiction fans, and even people who don’t typically explore that genre.