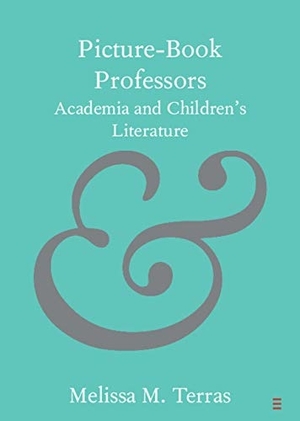 The publishing industry is a complicated and ever-evolving machine that many outsiders find to be completely confusing or a mysterious black box. However, for those interested in taking a peek behind the curtain, Cambridge University Press has started publishing a series of books in Publishing and Book Culture. Picture-Book Professors: Academia and Children’s Literature, by Melissa Terras, is a short, but incredibly well-researched study on the presence of people of academia and their representation in children’s literature. The premise is to, as Melissa so succinctly puts it, “…see how children’s literature responds to and, consciously or unconsciously, echoes societal trends in education, politics, history and popular culture. Looking at such a publishing history raises issues of the role of authors, illustrators and publishers in both utilizing and standing up to established pejorative stereotypes within the children’s book industry” (p. 7).

Melissa pulled together a corpus of 289 children’s books to examine, and the majority of these were aimed at children under the age of twelve. All of the books examined were printed in English and required illustrations. The book contains extensive foot notes for anyone interested in further reading. The book also contains occasional illustrations as examples as well as several graphs to visually represent her findings. The book makes a number of observations such as typical stereotypes of representation related to academic figures as represented to children. She also notes the societal class, gender, race, dress, and overall appearance, and points out how these representations are potentially both products of their time, but also bringing awareness to continued trends. After all, children learn by observation, and perhaps individuals involved with the publishing industry should consider the potential takeaways children may parse from seeing the same stereotypes again and again. Melissa also notes how academics and learning institutions feature in the plot of such books, and how sometimes they are not more than a footnote, while others revolve entirely around the system of academia. The book is easy to consume, at only 211 pages, especially with the book’s smaller than average dimensions.

While the book is unlikely to appeal to a broader audience, in part due to its academic bend with its presentation, Picture-Book Professors is a fascinating read for anyone interested in learning more about the publishing industry, its history, as well as those curious about children’s literature in general. If this review has piqued your interest, then I highly recommend picking up this gem.