The Cuban Affair by Nelson DeMille 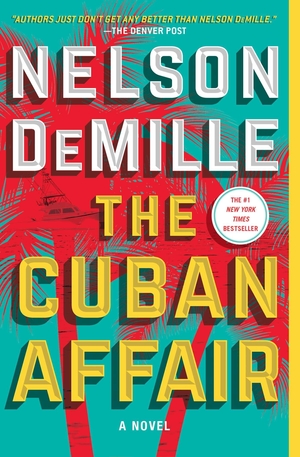 If you’ve been looking for a fast-paced thriller to read, The Cuban Affair by Nelson DeMille fits the bill. Plus, the vivid descriptions of Miami and Cuba will keep you warm on these cold winter nights! Captain Daniel “Mac” MacCormick is a thirty-five-year-old Army vet with a Silver Star and two Purple Hearts who has resettled in Key West, Florida where he charters his deep-sea fishing boat, The Maine. He’s approached by Carlos Macia, a Cuban-American lawyer from Miami who is involved with anti-Castro groups, and wants to charter Mac’s boat for a supposed cruise to Cuba to participate in a fishing tournament. This ends up being a front for a covert and dangerous mission to recover $60 million dollars in currency and various land deeds that never left Cuba after the revolution. I appreciated Mac’s no-nonsense approach to the mission—he’s aware of the danger, but enjoys taking risks and could certainly use the two million dollars that Carlos offers as payment. Along the way, Mac finds himself entangled in a passionate affair with Carlos’ client, the beautiful and mysterious Sara Ortega.

Mac’s character is hilarious and exudes DeMille’s trademark sarcastic wit throughout the novel. Just read this scene where Sara is discussing the job with Mac:

She smiled again. “Teamwork makes the dream work.”
“Sounds like a T-shirt.”
“Do you have confidence in me?”
“You seem to have confidence in yourself.”
“What more do you want?”
Well, I’d like to get laid, but I’d settle for three million instead.

Or, see this exchange between another of Carlos’ clients and Mac:

“Almost all Cubans believed that the Castro regime would not last more than a year. That the Americans would not allow a Communist country to exist off its shores.”
“Why not? We’ve got California and Vermont.”

DeMille kept the pace flowing and I thoroughly enjoyed the inevitable plot twists as well as the depiction of modern-day Cuba. The Cuban Affair is another exciting thriller from a master of the genre.