The Widower’s Notebook: a memoir by Jonathan Santlofer 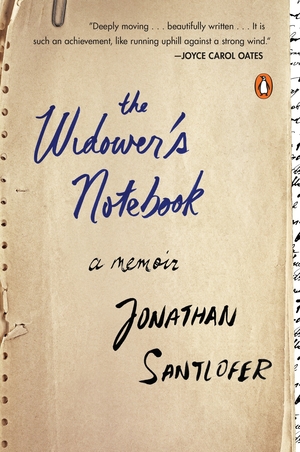 Five years ago, Jonathan Santlofer, a writer of crime novels and an artist, was working in his New York loft apartment. His wife, Joy Santlofer, a food writer and historian, was reclining on their living room sofa after having had outpatient knee surgery the previous day. After about a half hour he returned to check on her, only to find her “reaching out” to him and “gasping for breath.” His 911 call resulted in the arrival of firemen and paramedics, with immediate initiation of life support protocols. Joy was transported by ambulance to the local emergency department with Jonathan transported in a fire chief’s car. Jonathan and their daughter waited in a small room until a physician ultimately entered and told them “We did all we could.” It is with these recollections of Joy’s death that Jonathan begins his memoir.

Over the following two years he struggled with loss, grief and the adjustment to elements of daily living. He found it difficult to stay in the house so he was out almost every night for dinner, but upon returning he wrote in a notebook the events and conversations. He describes indecision about Joy’s things, her office, her photographs. He could not work on his new novel. Ultimately he found help when attending an artists colony and began to work on this memoir using the notebook as well as creating drawings of his and Joy’s lives based on their photographs. This is an extremely personal, detailed recounting of one man’s battle to come to grips with not only the loss and grief at the death of his wife, but also his sense of guilt. The memoir is touching, emotional, and beautifully presented.