A Taste for Vengeance by Martin Walker 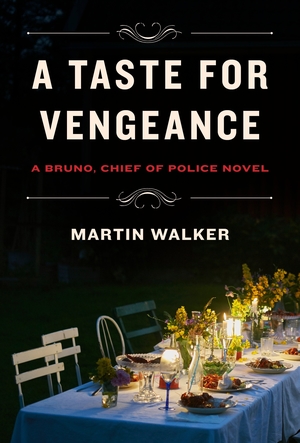 Bruno, Chief of Police of St. Denis, gets a call from his friend when one of guests at the cooking class she hosts, does not show. This story has Bruno recalling his past military experiences, some local IRA terrorists, and the realization that vengeance may be a motive in the killing. The story intertwines with his rugby coaching, cooking classes, his new promotion, his morning horse rides, his gardening, and his dog, Balzac. His busy life leads him into a bit of trouble when one of his female rugby players finds herself up for the French National squad and also newly pregnant. In this small community, there are not many secrets. The intrigue with the murder investigation leads to a shoot out that includes Bruno and one of his close hunting friends, but everything settles down with a long drink of wine, as Bruno always says.

This is the eleventh addition to the Bruno, Chief of Police series and the second novel in this series that I have read. This novel has many plot threads, some more intriguing than others, and works in conflict with the locals as well as some that bring international intrigue to the community. The character, Bruno, seems almost super human with everything he does in one day! He always does his own home cooking too with vegetables from his garden and other fresh things he buys at the market during his busy day, yet he somehow has time to invite people over for dinner! The author keeps the reader interested with beautiful descriptions of the Perigord and makes every reader want to visit this beautiful fictitious town. Bruno definitely has charm and is loved by most people in his community! This was an enjoyable read.