Waiting for Eden by Elliot Ackerman 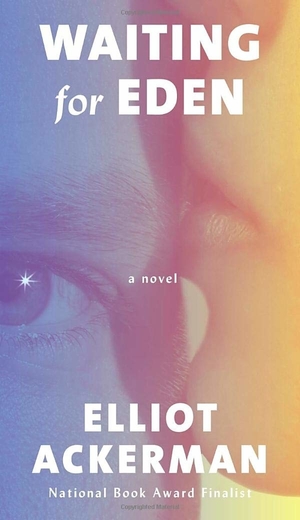 Waiting for Eden is a powerful book and yet, a reader could be fooled by its simplicity. The reader meets Eden in a hospital room and he is not recognizable as his former self. His war injuries leave him unable to speak or even communicate in any way, but his mind holds him captive with memories. He hauntingly believes cockroaches crawl over him and travel his room at night. Mary, his wife, visits his room and travels between the hospital and their home and daughter. She volleys back and forth between wanting Eden to heal and believing that perhaps he is better off dead. Eden’s fellow soldier narrates the story and carries his own guilt. The narrator discloses facts slowly and the reader will wonder what fact is and what is just the fabrication of Eden’s tormented mind.

Ackerman expertly weaves a mesmerizing story with painstaking detail to the point that the reader will believe he is in the hospital room with Eden. The writing is simple and uncluttered but heavy with meaning and emotion. Ackerman is a talented writer and even if the reader is not interested in war stories, Waiting for Eden will pull them into the dream-like story. The reader will learn that no party is absolved from wrongdoing and fear and regret play a larger role than one is willing to admit.