A Death in Eden: A Sean Stranahan Mystery by Keith McCafferty 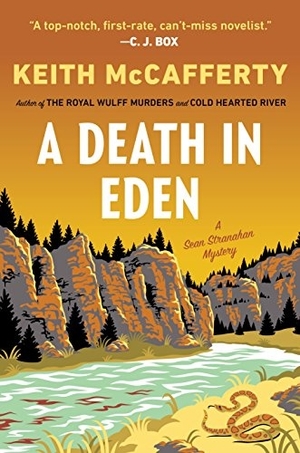 This novel arose out of public outcry over a proposal to open a copper mine in the headwaters of the Smith River in central Montana. A 59 mile stretch of this beautiful river, often described as “a cathedral” of nature, is part of a Montana State Park, and is open (by permit) to paddlers who wish to float it and camp on its banks, and anglers who wish to fish it. Both the beauty of the Smith River canyon and the fly fishing are awesome. The landscape is marked by impressive limestone cliffs rising abruptly above the river, and the caves in those cliffs harbor ancient Native American rock art, a national treasure.

The threat to the river is where Keith McCafferty begins A Death in Eden. In the midst of environmental concerns about the mine, someone is secretly erecting a series of large, frightening scarecrows high up under the cliffs. They seem to send a scary message about the potential death of the Smith River if copper mining is allowed. Enter some serious fly fishers, a film-maker, two detectives, a three-legged dog and, ultimately, the unknown scarecrow-maker. One of the detectives is a Native American operating under cover to find and arrest their maker. The agent is floating the river looking like a normal traveler out on an adventure with his son. When the two of them go missing, however, a second detective, Sean Stranahan, is dispatched to find them, or their bodies. And from that point on, murder, mystery and mayhem fill the pages all the way to a dramatic showdown.

This is McCafferty’s 7th novel and one of his best. It is important to note that his main character, Sean Stranahan, is also a fine landscape painter when he isn’t (and sometimes when he is) on a case. As the story unfolds, the reader will discover more than a mystery to solve, for the author also provides enticing descriptions of the beauties of nature and a disquieting discussion of the politics of environmental protection.

As McCafferty puts it in the words of detective Stranahan – while the Sistine Chapel is incredibly beautiful, the “hand of God [doesn’t] reside in Rome, glimpsed through the brushstrokes of a thirty-three-year-old genius” but “in Montana, in champagne riffles and golden cliffs in a canyon that had been cut and molded over three billion years, and could not be described in words, nor captured by any artistic medium.”

And in the shadow of the copper mine controversy, from Stranahan’s viewpoint, the environmental politics sound disturbingly familiar: “There exists today a fundamental division between those who seek to preserve the natural world for the enjoyment and the health of the planet, and those who will put it in peril for whatever value they can extract from it, and who would just as soon give their sons and daughters money as wonder…”

The author also highlights the perceptions from the heart of Harold Little Feather, the Native American undercover agent: “Everything [he] liked best about camping was sensory. The sound of Indian Springs as it silvered over watercress and moss. The resinous scent of the pine blocks when he split them. The mesmerizing dance of the flames as the angels took the hand of the devil. And the woodsmoke itself, pungent, as salty as a smoked ham.”

“You could smell the spirits of the grandfathers, Harold thought, if you took the time to and your mind wasn’t somewhere else…” One of the best smells of all was “the sizzling of the trout he’d caught before the sun died, a fine brown whose flesh was as orange as the flames.”

Whenever I read novels like this, I not only want to compete with the detectives to solve the crimes, but also to savor an author’s fine writing.  Besides his Montana-based books, the author is also an editor at Field and Stream magazine. As an outdoor writer, Keith McCafferty is a pro, and if you like a snapping good mystery, A Death in Eden is recommended.