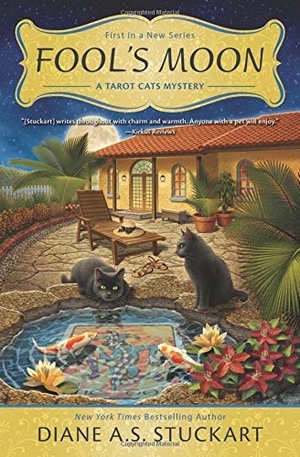 Diane A.S. Stuckart’s cozy new mystery, Fool’s Moon: A Tarot Cats Mystery, is a tale of murder, tarot card reading, suspense, as well as investigative sleuthing with the help of two black cats and a loveable pit bull. Ruby Sparks is now managing her half-sister’s store and trying her hand at tarot card reading. Her life becomes more complicated when she rescues an abandoned cat on the street and ends up adopting her. Ruby’s new cat, Ophelia, is not only willing to help with her own deductions for tarot card readings, she knows she must help her original owner’s housekeeper when she turns up at the shop for a tarot card reading pertaining to her boss Mrs. Givens’ death. While searching for her brother, Brandon, Ophelia must also help Ruby solve not one, but two mysterious deaths.

This story is told through multiple different third person perspectives, allowing for the reader to learn more about Ruby as well as her new cats, Ophelia and Brandon. The novel starts with Brandon and Ophelia fighting to survive and escape a cardboard box that Mrs. Givens’ son had left them in on the street after Mrs. Givens’ death. Brandon, barely able to escape, rushes to get help for his sister, who is soon discovered by Ruby and Zuki, her pit bull. Chapters told through Ophelia’s point-of-view allow the reader to learn more about her goals, including reuniting with her brother, Brandon, who has been missing for a month, as well as wanting to solve the mystery surrounding her first owner, Mrs. Givens’ death. Ophelia and Brandon’s sibling friendship as well as their friendship with Zuki is a great addition to the story. The cats’ perspectives are realistic, well-written and humorous. Their teamwork helps to solve the mystery and makes for a unique twist in the story’s plot.

In addition to Ophelia and Brandon’s perspectives, Ruby’s perspective provides another element to the story. She is a relatable character who has a soft spot for animals, is learning her way around the new job, and is furthering her education. Her self-doubt in regard to her abilities with tarot card reading is realistic and her confidence as well as determination increases throughout the story. Along with dynamic characters and interesting friendships, Ruby’s tarot card readings are another compelling aspect to solving the mystery. Not only does Ruby analyze people’s behaviors and responses, she reads her cards to help figure out people’s true motives.

Stuckart crafts a realistic South Florida setting with tarot card readings at wealthy parties and at Ruby’s half-sister’s shop, Ophelia and Brandon becoming accustomed to a new home, as well as the struggle for animals to survive on the streets. The scenes with Ophelia, Brandon and Zuki sneaking out to find clues add to the suspense and survival aspects of the story.