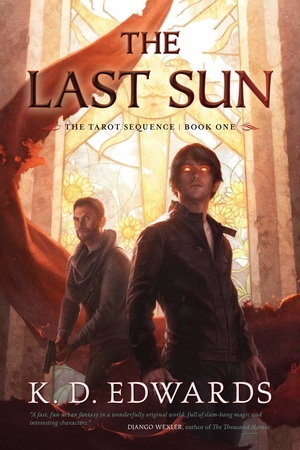 “My name is Rune Saint John.

I am, before anything else, a survivor: of a fallen House, of a brutal assault, of violent allies and complacent enemies, of life among a people who turned their backs on me decades ago.

Among those who matter I am known and notorious. I am the Catamite Prince; the Day Prince; the Prince of Ruin. I am the last scion of my dead father’s dead court, once called the Sun Throne, brightest of all Arcana, now just so much ash and rubble.

These are my accounts.”

The Last Sun by K. D. Edwards may not be the book a reader expects. At first glance, it might seem a magical realist mystery, but the horror, brutality, and pain of the book make it more of a dark fantasy. While set in the modern human world, the main characters are not humans, but Atlanteans. Atlanteans in the Tarot Sequence are reminiscent of the Tuatha de Danann, powerful otherworldly creatures steeped in magic and tied closely with the fae. Noble families, known as Arcana, that personify the major arcana of Tarot rule the Atlanteans. Knowledge of the Tarot is not necessary to enjoy the book, but certainly is helpful. Not only do the noble families have powerful hereditary magic known as Aspects, which are based upon the symbolism of the arcana, but Edwards plays with expectations for the role and nature of the Arcana, such as having a Lady Justice who does not protect, but does avenge. A reader not versed in Tarot may well not notice some of the more nuanced commentary.

As the Atlanteans are not human, they do not follow human morality, and the brutality of the book stems from this idea. For Atlanteans, only the strong matter, and victims are merely those too weak to protect themselves. Rune, the protagonist, challenges this concept, beginning the novel in the shadow of his House’s annihilation, a social pariah and a publicly-known victim of sexual assault. He lives every moment with the pain of his trauma, and yet he fights with a strength and tenacity that puts other Arcana to shame. For the reader, it is the possibility of his healing, even more than his survival, that will have them emotionally engaged and on edge, hoping that Rune might allow himself to find a place to be happy.

Though all of Edwards characters are interesting and fun – and many downright lovable – one downside to the book for some readers may be the primarily male cast of characters; however, the few minor female characters that Edwards does provide he writes full of life, giving hope for a some well-written female leads in future books.