Shadow Vigilantes: How Distrust in the Justice System Breeds a New Kind of Lawlessness by Paul H. Robinson and Sarah M. Robinson 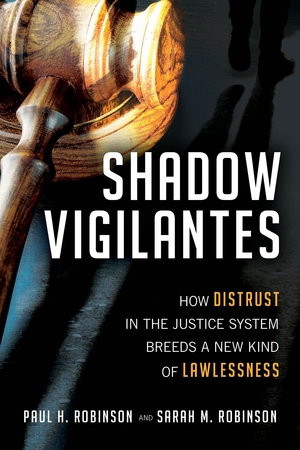 Outrage is a sudden thing, but its effects linger and can lead to suspect actions with unintended consequences. Shadow vigilantism is one possible result. America is a country of laws. No one is above the law. But sometimes miscarriages occur and, when they do, in enough instances, the consequences can be silent and corrosive to a community’s livability or a community in revolt like the Los Angeles riots after the Rodney King beating.

Vigilantism comes in two basic forms: Overt, where people take an active enforcement role supplanting an ineffectual or corrupt justice system or the passive aggressive types; the shadow vigilantes of the title, where persons, alone or in communities, refuse cooperation with the authorities because of said authorities’ inability to protect witnesses or that ignore their grievances, for whatever reasons they imagine they have for malfeasance in the first place.

Sometimes, even those officials responsible for justice e.g. police and/or judges may make adjustments in their duties such as testilying and other methods of achieving rough justice, such as avoiding exclusionary evidence rules, deadlines, or other procedural obstacles, in their own search for justice.

The authors have provided examples of failures of the justice system that have made the news. Some identified by the names of the victims and some by the names of the perpetrators. Most of the examples are from the eighties and nineties and so might not be readily identifiable by the reader but they are described in such detail that memory is not really required. They also provide examples of organized resistance to inept or hostile officialdom, a few of which made a positive difference. Only one vigilante group, though, in San Francisco in the 1850s is described as succeeding and subsequently disbanding. Several others achieved limited goals, though not without their downsides or complications. It’s interesting that, even though they generally disapprove of vigilante actions, the authors are, like many of us, conflicted. So much so that they include a section on how to do it right!

The bottom line is that there are recent failures of justice, such as resulted in Black Lives Matter and #MeToo. There will inevitably be more failures that will crop up and lead to citizen reaction that might wind up with vigilante action. Shadow Vigilantes is a thorough treatment of all facets of vigilantism and its myriad permutations. Perhaps prevention starts with understanding. If so, Shadow Vigilantes is a good start.