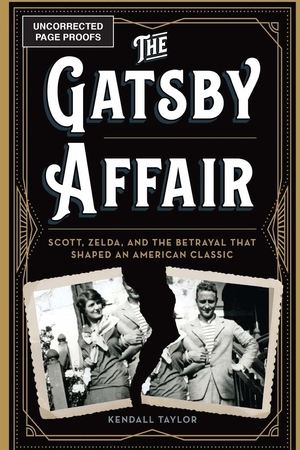 In 2001, cultural historian Kendall Taylor, Ph.D. published Sometimes Madness Is Wisdom: Zelda and Scott Fitzgerald: A Marriage. Now Taylor returns to the same subject matter in The Gatsby Affair: Scott, Zelda, and the Betrayal that Shaped an American Classic. In the preface, she explains that in her original biography she didn’t fully explore Zelda Fitzgerald’s affair with French aviator Edouard Jozan.

“Sometimes, one or two incidents make an indelible impact on our lives, and for the Fitzgeralds, the Jozan affair became the marker. Scott wrote about the betrayal until he died, and twenty-five years after its occurrence, Zelda still was agonizing over its ramifications.” p. 192-193

Despite the biography’s title, Taylor covers the entire scope of Zelda and F. Scott Fitzgerald’s lives. She summarizes the five-week-long affair in the preface and chronology. Then she returns to the beginning of their lives until the third chapter, which focuses on Jozan. Taylor discusses how Jozan influenced Scott’s The Great Gatsby, Tender is the Night, and short stories and Zelda’s Save Me the Last Waltz and short stories. The bulk of the book is then devoted to their decline, which largely took the form of Zelda’s institutionalizations and Scott’s alcoholism.

The book is well researched but repetitive. The entire Jozan affair could have been examined in a long essay or slim volume. From her ample research, Taylor draws conclusions that heavily criticize Scott and empathize with Zelda. While some readers might enjoy her interpretations, other might chafe at the bias. Overall, this is an interesting book for anyone fascinated by the Lost Generation, the 1920s, or the Fitzgeralds. Even for someone who’s read all of the Fitzgeralds’ accessible writing, Taylor manages to include new information about the couple.