Steven: I guess you could say that it was in my DNA. Often the experiences of childhood have a profound effect on later thinking. My father started a business in the basement of our house. All family members participated (I packed boxes for my allowance and travelled with him to trade shows and product manufacturers – there must have been a dearth of babysitters at the time). As a child I actually lived the inventive and entrepreneurial experience of building a new business rather than learning it from afar or in an academic setting. It became an integral part of me; it was the family’s discussion every evening at the dinner table. When I grew up and finished college and graduate school, it wasn’t a question of what I would do, but when and how I would do it.

PBR: You have an impressive background in inventing, entrepreneurship, business ownership, teaching, your own patents and working with gifted children and robotics. Why did you decide to write about it all? Was this just the next evolutionary step in your career or did you always want to write about inventing?

Steven: I have always loved to write. In fact, in college I was a double-major in engineering and English with an emphasis on creative writing. The writing of this book was influenced by three things: first, I wanted to put the ideas that had served me so well in my career into a form that others could learn from; secondly, the concepts of simplicity, elegance, and robustness continued to resonate with me as an approach, not only to engineering design, but to coming up with the best solutions to many of the problems that one encounters in life. I wanted to explore these ideas in writing and see where they led me. And finally, and maybe most importantly, I wanted to create and dedicate a work to my father who was really the inspiration and the genesis of many of the ideas about which I have written.

Steven: Trade shows are just one among many places in today’s world to get ideas for inventions. You can get inventive ideas from reading books, magazines, trade journals, going to museums, going shopping, or just walking down the street and noticing what is around you. I like to wander through hardware stores or junk stores whenever I come across them, just looking at all the “stuff” on the shelves. One of the most ubiquitous sources of ideas today is the internet. Browsing the internet or doing the “endless search” within a particular subject area yields a treasure trove of novel ideas, products, and approaches. The downside, of course, is that you do not have a multi-sensory experience. I love to be able to see, touch, and play with the things I come across. Remember, the more senses you involve in examining something, the more information you are providing for your brain to process. With all we can get from the virtual world, the actual physical experience of ‘being there’ still holds much value. I am an amateur musician and as everyone knows, there is a difference between listening to music on the radio and attending a concert. That said, both are very valuable, each in its own way. Finally, many ideas for invention simply come from the mundane experiences of everyday life. One just has to be sensitive and aware enough to be able to recognize need in what we often take for granted. The invention of Velcro by George DeMestral, for example, came from taking a walk in the woods and having the annoying experience of plant burrs sticking to his pants.

PBR: What would you say, in your experience, is the most frustrating part of inventing, from inception to the “store shelf”?

Steven: The most frustrating part of inventing is the part that you thought would be very easy and turns out not to be. This can come anywhere along the line from inception to market. Frustration comes from a disconnect between expectation and reality. If you think something is going to be challenging and it is, you generally do not get frustrated as you expect the difficulty. You simply gird your strength and deal with it. The frustration comes when you expect something to be simple and after repeated attempts, you find that it isn’t.  As a general rule, the further you progress into the more specific and detailed areas of your inventive process, the greater your chance of becoming frustrated.  For example, when you are in the early part of the process playing with large ideas, it is usually lots of fun. You can make mistakes, trip over yourself, and it doesn’t really matter. You are “brainstorming” and rejected ideas lead onto other, perhaps completely unexpected, novel ideas. Once you get further into the nitty-gritty, frustration can easily build when things don’t work out as expected. Frustration also comes when you have to deal with things outside of your own control. When the invention is no longer solely dependent on your creative process, but reaches the stage where others – marketers, financial sources, manufacturers, etc – become involved, you can become easily frustrated with the complex process of moving your idea from concept or rough prototype to reality.

PBR: If you could only give one piece of advice to an aspiring inventor, what would that advice be?

Steven: Believe in yourself and have courage. This is the most difficult thing for any inventor. You are venturing forth into the unknown (that is why it is called inventing). There are no sign-posts or markers to reliably guide your way. Often your peers will think you are crazy. Since you are doing something new, there is no comfortable place to look for validation. It’s just you and the idea – along with the Greek chorus in the background saying that your idea is no good or it will never work or it will never sell, etc. You need tremendous courage to be alone and pursue your vision. Thomas Edison once said that, “many of life’s failures are people who did not realize how close they were to success when they gave up.” Believe me, it’s hard. My most important counsel for the aspiring inventor is: Have the courage to move forward.

PBR: If a battle or insurmountable obstacle gets in your way, at what point do you let an idea go and move on to something else?

Steven: Good question, which means it is hard to answer. Sometimes, despite best efforts, you cannot make progress. Maybe the idea isn’t right. But how do you know? After a sustained effort on an idea (and only you can determine how hard or long that effort is), move onto something else. This does not mean you are giving up on the idea; it only allows you to gain perspective. Perspective is incredibly important in evaluating an idea. It is often impossible to evaluate something when you are in the midst of it. This is why we have both writers and editors to create books. The editor is not the creative person but the uninvolved objective viewpoint. With an invention or problem where you have reached an insurmountable obstacle, walking away does not equal giving up. It means giving your mind perspective and the freedom to consider other choices or approaches. I have a robot that I was working on for 9 months and was unable to solve a certain technical problem with it. I know that the problem can be solved, but I have tried everything, and at this point, I don’t know how to solve it. The robot is now resting comfortably in my workshop and I am confident, that although I have moved on to other projects, I will at some point – probably out of the blue when I am least expecting it –  come up with an idea that will crack the untenable problem. Inventing is a little like fishing: you have know when to pull hard and when to give slack. You also have to trust yourself to know that when giving slack (or even letting go), you are not giving up. It is just part of the process. 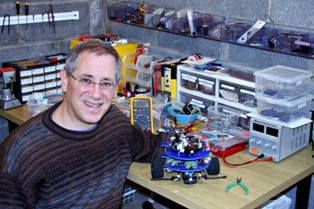 PBR: How long did it take you to write The Art of Invention?

Steven: The complete first draft of the book took me 16 months to write.  It is based on many years of accumulated experience and the book represents the written distillation of that experience. It took approximately four years from the day I started writing my first notes to the day the book was published.

PBR: Will you be writing more books on this subject?

Steven: I am thinking that my next book will complement this book but will be about entrepreneurship and business. Businesses are often founded on an invention or inventive idea, and I would like to write more about taking ideas and inventions to that next step. One of my goals for The Art of Invention is that it will be used in educational settings to give students a taste for the passion and excitement behind creating something new.

PBR: What do you do in your spare time when you are not teaching, running a company or inventing?

Steven: First and foremost are family activities. Our four children keep my wife and I pretty busy. I am also an avid cyclist (a roadie) and try to ride at every opportunity. Finally, as I mentioned earlier, I am an amateur flutist, and I play in a jazz quartet. We play on a regular basis around the NJ/NY area.