Two Full Circles to the Top

Two Full Circles to the Top
By L.J. Sellers 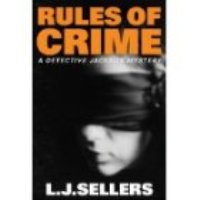 As a novelist, I’ve come full circle in the publishing world—not once, but twice—which could have left me dizzy, discouraged and broke, but instead launched my stories toward more success than I ever imagined.

I self-published the first book featuring Detective Jackson (The Sex Club) in 2007 after publishers said they read it in one sitting, then passed on it anyway. Back then, self-publishing meant spending thousands on an offset print run and finding a distributor that would get my indie title into bookstores. But I was determined to bring my work to the market, and I made the investment while working full-time.
Readers loved the story, and a small publisher picked up the next two books in the series (Secrets to Die For and Thrilled to Death). I was grateful for the opportunity to feel like a traditional (real) author, but I soon realized that a small press couldn’t do anything for me other than that.

In early 2010, I was laid off my newspaper job, my second publishing layoff in two years. I started freelance editing, and soon after, I became aware that some writers were making a living selling ebooks. I decided it was time to take charge of my career and to become the full-time novelist I’d always wanted to be.

First I self-published two standalone thrillers I’d written before the Jackson series and was soon making a little money on Kindle. By August, I had worked up the courage to leave my small press and ask for my rights back. I republished the three Jackson stories and in October added the fourth (Passions of the Dead). I marketed full-time for weeks, and by December, I was making a living selling ebooks.

The first year as an ebook indie was wild, and I learned that fiction has buying seasons, and that you have to keep a constant presence on one of Amazon’s top 100 lists to maintain visibility. The second year, Amazon introduced Kindle Select, and my sales jumped considerably.

In May 2012, Thomas & Mercer (Amazon Publishing) offered me an 11-book contract, and I happily signed it. I’d been doing very well with the Jackson books—which had become the top-rated crime series on Amazon—but I was tired of working 70 hours weeks as a writer, publisher, and marketer.

That was a great decision, and I’ve since written two more Jackson stories and started a new thriller. I’m still active in social networking and blogging, but my new publisher does the heavy lifting with marketing and publicity, and for that I’m grateful. The best part is that my readership keeps growing. My greatest joy is hearing from a new reader who says something like, “I just read all six Jackson books in a week and loved them all!”

Yet I never take my readers for granted. I work hard to make each story unique, introducing new crimes, new structures, and different point-of-view characters. And I reward and challenge myself as a writer by taking breaks from the Jackson series every once in awhile to write a standalone thriller and stretch my creative processes.
After years of indie publishing and small press releases, Jackson #7 (Rules of Crime) debuts February 26 as the first book I’ve put out originally with Amazon Publishing. I’m excited to have finally reached this stage of my career, and I can’t wait to see what happens next.

L. J. Sellers is a native of Eugene, Oregon, the setting of her thrillers. She’s an award-winning journalist and bestselling novelist, as well as a cyclist, social networker, and thrill-seeking fanatic. Her novels featuring Detective Jackson include The Sex Club, Secrets to Die For, Thrilled to Death, Passions of the Dead, Dying for Justice, Liars, Cheaters, & Thieves, and Rules of Crime. In addition, she’s penned three standalone thrillers: The Baby Thief, The Gauntlet Assassin, and The Suicide Effect. When not plotting crime, she’s also been known to perform standup comedy and occasionally jump out of airplanes.