It All Started With Columbine

I’ve always been intrigued by how writers come up with the stories they tell. Do they write about personal experience? If so, how much is fiction and how much isn’t? Do they sit and watch people in an airport and formulate ideas based on how complete strangers interact around them? Do they write about their dreams? Do they listen to the words of their children and bring those words to life?

Finding inspiration as a writer has always been a challenge for me. Only when I stopped looking did ideas start to take shape. And in the case of my most recent novel, Crumble, the concept flourished from a single tragic event, but the final story took years to unfold—morphing and building as the world around me changed.

On April 20, 1999 I was 25 years old and living with my fiancé in a beachside bungalow in Santa Barbara, California. He had decided to return to UCSB to finish his degree after playing basketball in Europe for eight years. I was in the process of looking for work—hopefully, something part-time as I was in need of free hours to start my first novel. Up until that day, I had been struggling with ideas. I had a small collection of thoughts—fragments of memories I’d hoped would spark the next best seller. Up until that day, I hadn’t considered writing for young adults.

I watched in horror as the Columbine massacre took place. I couldn’t comprehend what was happening. Even for days afterward, I sat in awe of the tragedy, of how distant it was—me being a graduate of a tiny high school in Northwest Montana. Guns in a school? Students killing students? Columbine consumed me. I wanted to sit down and write about it, but within a few weeks of the tragedy, I found out I was pregnant, and I set aside any thoughts about starting that first novel.

My fiancé and I left Santa Barbara in June of that year and moved back to Montana. My son was born in December, and for the next year, I did nothing but care for him. But in late 2000, I began to follow the court cases stemming from the Columbine massacre, and I was pulled back into watching news reels from that day, listening to the horror recounted by survivors, and reconnecting with those murdered through stories told by their friends and family. I looked at my small son and found a sudden inspiration to write—someday, he’d be a high school student roaming the halls with other students who could be another Eric Harris or Dylan Klebold. 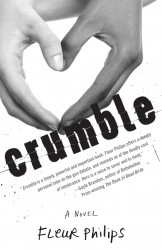 I finished the first version of Crumble in June of 2001. It was the story of a young love ripped apart by ignorance and prejudice. It was written with Columbine in mind. When I started teaching in the fall of 2001, I put the manuscript on a shelf. But the story stayed with me. After the election of President Obama in 2008, there was a spike in the formation of hate groups across the country. And although the same social issues had been lingering for years, they seemed to become more apparent—abortion, gay rights, gun control. And then there was cyber-bullying. Morphing. Building.

I pulled Crumble off that old shelf and started revising it in January of 2011. I finished it just days before the Sandy Hook Elementary School shooting. It’s the same story now as it was back then, but it encompasses a much larger myriad of social issues our teenagers face today. The inspiration behind my writing stems from my feeling that, as a writer, I have a responsibility toward educating and enlightening, and because I’m the mother of a now 13-year-old, I truly believe my responsibility is to reach out to young people. To educate and enlighten them, and to remind myself of their fragility in an ever-changing world. 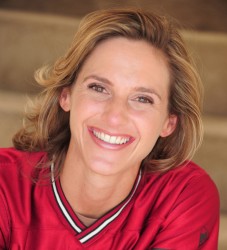 Fleur Philips is an award-winning author who holds an MFA in Creative Writing from Antioch University and a Bachelor of Arts in English from the University of Montana. Her first novel, I Am Lucky Bird, was selected as a General Fiction Finalist for the 2011 Book of the Year Award from ForeWord Reviews. Her current novel, Crumble, was named Young Adult Winner from the 2013 San Francisco Book Festival and was selected as a Young Adult Fiction Finalist by the 2013 International Book Awards. She lives in Upland, California, and when she’s not writing, she’s cheering for her son in his athletic endeavors. Connect with Fleur at www.fleurphilips.com.